In the United Kingdom, the switch from a defined-benefit (DB) pension system to a defined-contribution (DC) system is effective in the private sector. Between 2004 and 2015, the number of workers in the private sector enrolled in DB plans decreased from 9.2 million to 7.2 million, while in the same period the number of workers in DC plans increased from 2.3 to 6.1 million, according to the Office for National Statistics (Occupational Pension Scheme Survey). Out of the 16.8 million workers remaining in the DB pension system, 9.6 million are employed in the public sector and 7.2 million are members of the private sector, of which 5.6 million are no longer actively contributing into the scheme but have accrued rights.

The Office for National Statistics illustrates how sharp the increase in defined-contribution pensions has been in recent years: 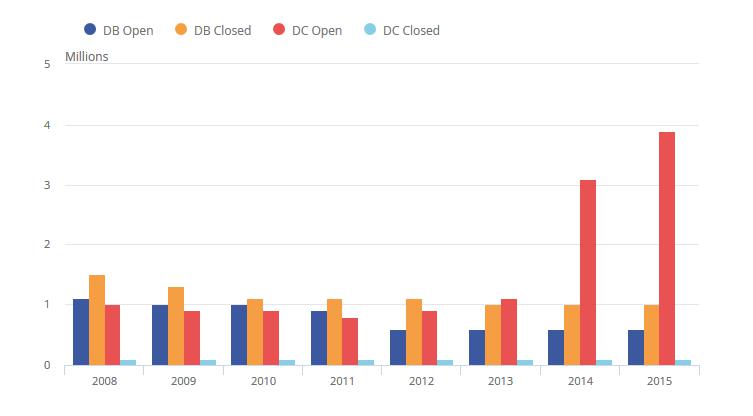 Already by 1986, the Social Security Reform Act created the possibility for companies and workers to step into private pension plans. But the big switch from the DB system to the DC system took place far later. This evolution has come both from the willingness of employers and the profound reforms led by the UK government, both pushed to find a solution to ensure workers have pension benefits in the future and to decrease the structural financial deficits of the DB system. The recent collapse of BHS highlighted the exposure of the final salary members to the finances of the firms that stand behind the pension schemes.

Indeed, the funding gaps of defined-benefit pension plans had kept rising in recent years under a multitude of unfavourable factors:

Another financial factor convinced almost all employers to switch from DB to DC:         the weighted average rate of contributions for the employer in DB schemes was 14 percent on opened plans in 2015, against 2.4 percent for DC-opened plans. DC arrangements were seen as the most likely route for employers to meet their financial obligations for pensions at reasonable costs. Most private employers are now offering only DC plans to their new employees. The UK government also progressively introduced the automatic enrolment system, which makes it compulsory for employers to automatically enrol their eligible workers into a pension scheme. It wants to prevent workers from missing out on valuable pension benefits because their employers didn’t offer them a pension. In 2015, National Employment Savings Trust was set up as a DC scheme to support the introduction of automatic enrolment, which accelerated the increase of DC plans.

The owner of the long-term risks of pension plans has switched from the employer to the employee.

In DB schemes, the employer bears the investment risk and must pay out pensions at an agreed rate, regardless of the returns made on the invested contributions. However, employees were conscious of the fact that employers could collapse and not pay pensions at all. In contrast, for DC schemes, members bear the risks as there are no promised levels of pension payments for future retirement. Both worker and employer save into the pension, and it is the performance of the investments that determines how much it will pay out in retirement. So with DC pensions, it’s uncertain how much there will be in the kitty at retirement.

The UK government further empowered employees with their latest reform “pension freedoms”, allowing employees to transfer their existing DB pensions (if well-funded) to DC pensions. And it was probably a very good moment in terms of the financial environment to do so. The transfers have accelerated the trend, because interest rates are low, and the lower they are, the higher the value of debt that the pension funds give to employees. According to the press, employees are taking 30 to 40 times their annual promised pensions out of DB schemes and placing them in DC plans. However, DC makes employees totally responsible for their future retirement income levels when choosing the forms of placement. This risk requires thoughtful consideration, even with the obligation to obtain prior analysis from a regulated adviser (over a value of £30,000). This analysis is, however, at the employee’s cost.

The government’s “pension freedoms” gave further possibilities to employees (with the underlying risks in decision-taking) with DC schemes:

UK private-sector employees are definitely becoming the pilots of their future retirement benefits; let’s hope they will be wise.

Corporate Governance: Who Is Liable for “Shadow Directors’” Decisions?