Top Posts
International Women’s Day – An Industry Reflection
Consumer Privacy; Corporate Responsibility?
Why 2020 Could Be a Turning Point for...
Why are UK Landlords Leaving the Rental Market?
Hong Kong-China Unrest and the Implications for China’s...
Tactics for Keeping your Top Team Happy
Home The C-SuiteChief Financial Officer (CFO) Beginning in 2018, IFRS 9 Will Impact the Understanding of Banks’ Profitability
Chief Financial Officer (CFO)The C-Suite

Twelve years ago, European publicly traded companies switched to the International Financial Reporting Standard (IFRS), a framework chosen by the European Union (EU) to ensure that all players have a common accounting language. In 2015, 126 countries officially supported the use of IFRS, accounting for 96 percent of the world’s gross national product (GNP); 114 countries were already imposing IFRS on all companies; 12 countries were authorizing IFRS, including Japan and India; and two were authorizing IFRS only to banks. On January 1, 2018, IFRS 9 for banks will come into force, replacing IAS 39 Financial Instruments. The International Financial Reporting Standard has a long history and has prompted a lot of debates among bankers.

Bankers still keep raising their voices against IFRS 9, as it brings negative impacts on their profitability.

IFRS 9 is supposed to bring transparency and improved possibilities to compare in a consistent way the value of financial assets between banks. The new model brought by IFRS 9 will also lead to the publication of useful information on changes in bankers’ credit-risk exposures. IFRS 9 deals with three main aspects of accounting for financial instruments:

First phase: from the investment, the entity recognizes the expected losses over 12 months, and the financial income (interest) is calculated on the basis of the gross amount of the instrument.

Second phase: if credit risk increases significantly and credit risk is not considered low, the expected losses over the term of the loan must be recognized, and the financial product (interest) calculated on the basis of the gross amount of the instrument.

Third phase: if the credit quality deteriorates to the point at which the recoverability of the principal is threatened, the financial product (interest) is calculated on the basis of the net amount of the instrument after depreciation, and the expected loss on the life of the loan continues to be provisioned. 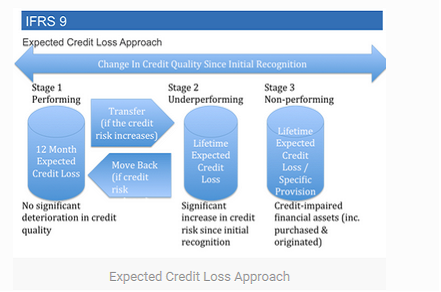 The willingness to understand and measure what losses could be expected by banks in the future is completely understandable. However, taking into account potential future losses in profit and loss statements of each cut-off period will lead to higher impairment. For instance, banks will have to recognize future losses even on undrawn commitments—following the behavior of clients in difficulties, who will draw from their credit lines as soon as needed. And banks also have to develop models to calculate the probability of loss in various adverse economic scenarios.

In the end, the impairment computed and taken into their financial statements will undoubtedly increase. But, as impairment computation has a direct impact on the level of capital adequacy of banks, the regulatory capital needed will also increase, pushing down the possibility of distributing dividends to shareholders. Most of the banks will suffer material capital depletion due to this change in accounting standards.

The work on the implementation of IFRS 9 is still ongoing.

Hearing the protestations of bankers, the Basel Committee on Banking Supervision (BCBS) recently announced a possible phasing in of the IFRS 9 impacts on capital, which could provide relief to some banks. The IASB has also announced its intention to create a specific group to assist stakeholders in their transition to new impairment provisions.