Top Posts
International Women’s Day – An Industry Reflection
Consumer Privacy; Corporate Responsibility?
Why 2020 Could Be a Turning Point for...
Why are UK Landlords Leaving the Rental Market?
Hong Kong-China Unrest and the Implications for China’s...
Tactics for Keeping your Top Team Happy
Home Editor's Pick Looming Tech War and Factors that Will Determine Who Wins
Technology

Looming Tech War and Factors that Will Determine Who Wins

The acrimony between the United States and China has a technological aspect that could lead to a faceoff. This is the result of the underdog Chinese industries challenging the established American industrial complex. The winner of this standoff will dictate global economic activity for the foreseeable future. A number of factors will decide the outcome.

US vs. China, and the importance of tech wars

To say that US-China relations are tense is an understatement. These tensions have many dimensions, including trade squabbles, military-exports competition, military faceoffs in the South China Sea and the tech war. While each of these tensions will have global implications, the one with the biggest long-term effect will be the tech war. The current tech war has its roots in Chinese inhibitions on relying on American technology. It is one of the few countries with its own replacements for Google, Facebook and even the Global Positioning System (GPS). However, the complaints on both sides have been veiled under a Cold War umbrella, in which such inconvenience has been seen as a small price to pay for the potential benefits of the relationship (for example, many American iPhones have been manufactured in China). According to this symbiotic relationship, American companies own the intellectual property of a product, while the Chinese take care of its manufacturing execution.

However, over time, it slowly became a competition of equals. Whereas China was merely a manufacturing sweatshop for iPhones in 2007, by 2018, it was the home of the second-biggest phone manufacturer in the world. Not only is China increasing its strengths but is also working to overcome its weaknesses. Its effort to increase its chip-manufacturing capacity is one such example. All of these tensions were brought into government-to-government relations when US President Donald Trump banned Huawei from accessing the American federal-government market.

A war, not a battle

With the initiation of a tech war, both countries may see falling collaboration. In addition, this lack of collaboration may lead to foreign markets becoming zero-sum games for competing industries from both countries. The supremacy of great powers can often be traced back to superiority in a given economic activity. For the British, it was the Industrial Revolution. For the rising Soviet Union, it was the speed of its industrialization. Yet, for the falling Soviet Empire, the inability to implement the Third Industrial Revolution on time seemed to be its undoing. This time, the ability to dominate the Fourth and Fifth Industrial Revolutions will decide the global hegemon for the coming decades. Therefore, it is important to understand the winning factors in the impending war.

All technological wars are decided by a number of factors. For the Fourth Industrial Revolution, the factors that will decide victory in the war will be the players’ capabilities for chip manufacturing, development of artificial intelligence (AI) and manufacturing.

The current tech war has chip at its roots. The miniaturization of chip technology has been the bedrock of modern technological development. For a long time, the industry relied on doubling the number of transistors as a measure of competition. According to Jim Fontanelli, an analyst at Arete Research in London, researching with this yardstick is so difficult that even Intel is facing trouble. After hitting some roadblocks, the industry has decided to change the measure of success.

Now, chip manufacturers have focused on creating specialized chips for everything from bitcoin mining to AI visual analysis. This is true for both US-based GlobalFoundries and Taiwan-based United Microelectronics, both of which are some of the most advanced chip manufacturers in the world. This has allowed the Chinese to play catch-up. Recently, Semiconductor Manufacturing International Corporation (SMIC), a major Chinese chip manufacturer, achieved a 14-nanometers chip design. While South Korea’s Samsung attained the same level in 2014, China is catching up fast. How fast China catches up to the United States will determine whether China is able to meet its ambitions to be a technological leader. Apart from hardware, software is equally important. China still relies on US-based software, such as Cadence and Synopsys.

Therefore, the speed of Chinese development in software and chip-manufacturing capacity will determine whether American or Chinese companies come out on top in this battle for technological superiority.

Artificial intelligence is key to changing the provision of goods and services and reducing costs by leaps in the process. The First Industrial Revolution allowed the poor in society to own stitched clothing due to falling costs. The rise of AI could do this for health care. Apart from economic advantages, AI will also give advantages in terms of hard power by playing an important role in strengthening the armies of the future. Therefore, it is important for both countries to secure the advantages of AI.

AI advantages can be secured via two means.

The first is to have a better talent pool than other countries. Currently, the United States leads the world with its AI talent pool.

Not only does the US have a better pool of talent, but it is also better organized within Silicon Valley. This allows it to better leverage this talent. In the past, funding used to be a strength. However, that has changed recently due to ever-increasing funding for Chinese AI-based businesses. Now funding is at least equal for Chinese and American startups. 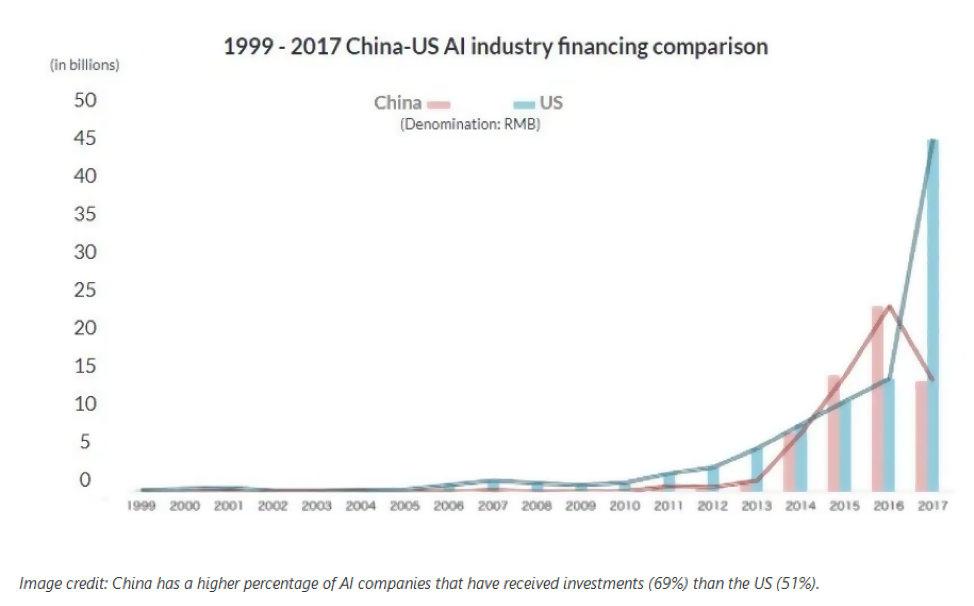 The second factor that determines success in the use of AI is datasets, and China retains the advantage when it comes to datasets. AI has to be trained on datasets; the bigger the dataset, the faster and better the AI training. China simply has a bigger population that is highly digitized. The following image shows the relative numbers of US and Chinese wireless users. 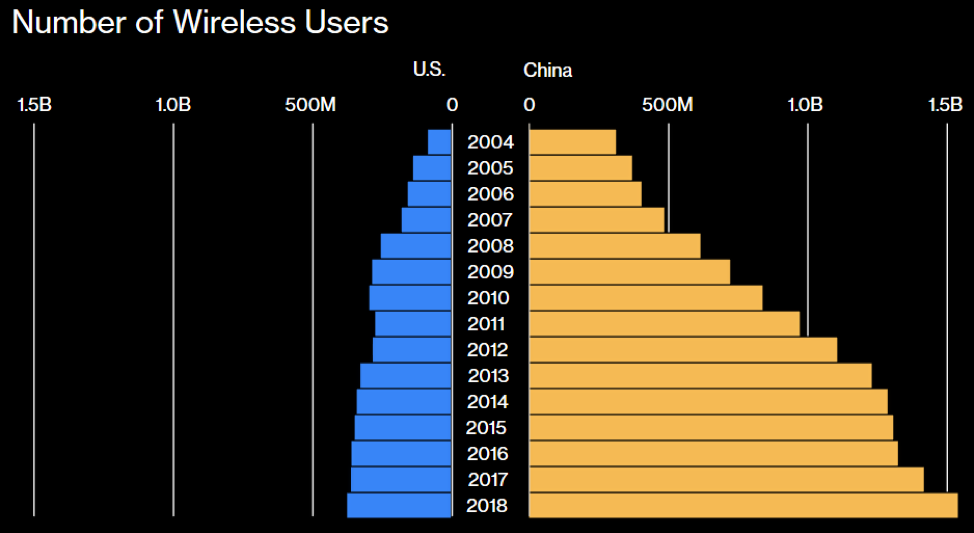 In the future, this advantage will only become more favorable for China, as cell-phone penetration in China is still in the early stages.

The Chinese not only have a bigger sample size to train their AI, but they can also do this with impunity. Whereas AI training in the United States might require Congressional maneuvering, the same act for the Chinese Government will simply consist of issuing some orders. This is the reason why China has taken the lead in facial recognition.

However, the Chinese lose their competitiveness when it comes to the development of theories and the use of supercomputers. This was shared by Andrew Chi-Chih Yao(Yao Qizhi), dean of Tsinghua University’s Institute for Interdisciplinary Information Sciences and the first Asian winner of the Turing Award. He said that China has pulled ahead when it comes to data, computing ability and algorithms. However, the dividends from these advantages will be limited unless the Chinese master AI theory and manufacturing of supercomputers.

The Internet of Things (IoT) is a very important part of the Fourth Industrial Revolution. The IoT works on the basis of networks. Like all networks, the more components in a network, the more the value received by each component. The ability to quickly create dense networks is dictated by manufacturing capacity. When it comes to manufacturing capacity, China has been the clear global leader since the end of the last decade. 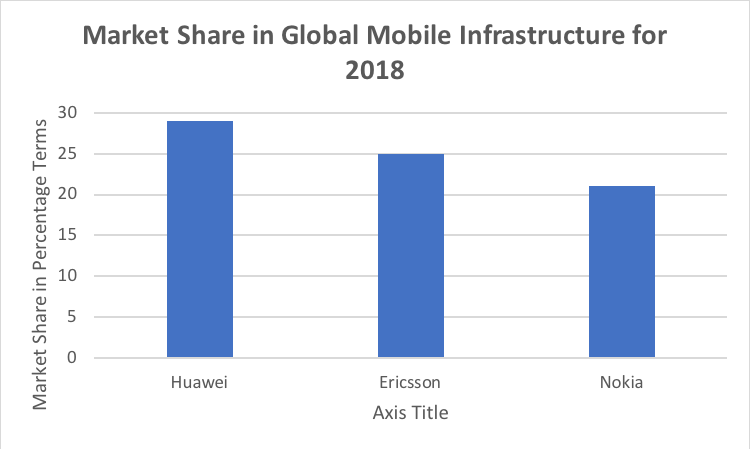 Please notice that the second and third runners-up are European firms rather than American ones. Such a weakness will play its part in a world in which network density plays an ever-increasing role.

The following diagram summarizes the steps that the US and China need to take to emerge as victors in this twilight of the titans. 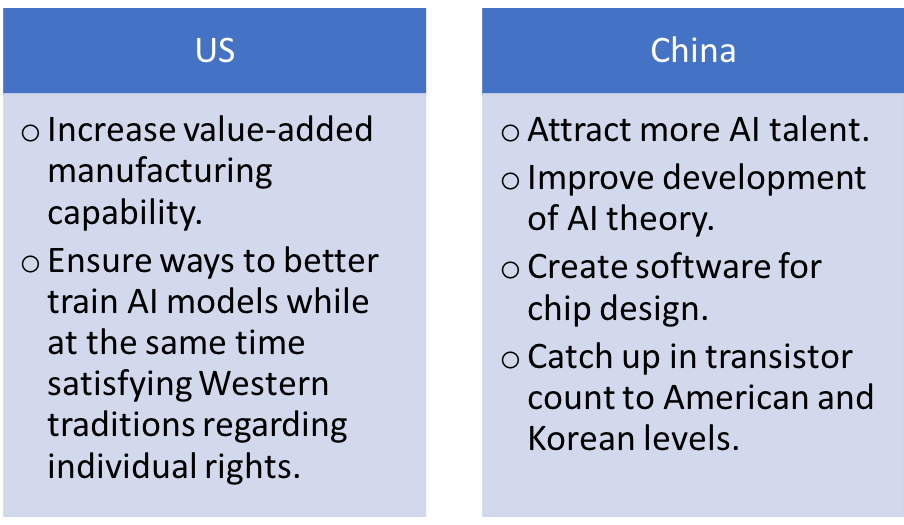