Top Posts
International Women’s Day – An Industry Reflection
Consumer Privacy; Corporate Responsibility?
Why 2020 Could Be a Turning Point for...
Why are UK Landlords Leaving the Rental Market?
Hong Kong-China Unrest and the Implications for China’s...
Tactics for Keeping your Top Team Happy
Home Editor's Pick Lessons to Be Learned from Microsoft’s Successful Transformation
Technology

Lessons to Be Learned from Microsoft’s Successful Transformation

Change is hard, and organizational transformations are among the hardest change endeavors. Only a few out of the very many companies that try to change dosucceed. One survey conducted by McKinsey & Company found that only 26 percent of the transformations witnessed by executives have been partially or completely successful in achieving their objectives. There is a lot to learn from both successful and failed transformations. But often, few cases emerge as remarkable examples that can be considered as classic cases and great experiences from which to learn. Those companies have beaten the odds and done so brilliantly. One of those examples is Microsoft.

The arrival of Satya Nadella, Microsoft’s chief executive officer today, in 2014 marked a new era for the company. The departure of Kevin Turner from his position as chief operating officer in 2017 further reaffirmed this. Turner’s departure left the field open for Nadella to bring his vision to reality. Nadella’s vision was crystal clear from the start. He put mobile and cloud computing first and stated that explicitly less than two months into his tenure. With that, the focus shifted from Windows to Microsoft 365 and Azure, Microsoft’s cloud-computing service that is formed of more than 100 data centers around the world. Nadella took it further and shifted the focus to machine learning and artificial intelligence (AI) to make sure that the company moved ahead of the curve.

Nostalgia is hardly good for transformations.

Organizations undergoing transformations are often reluctant to shed their old paradigms in favor of newer and more efficient ones. They fear the unknown and prefer to stick to what they know works for them. Transformations require human involvement and courage to make bold decisions that are often risky. Nostalgia for the past hardly helps. Had Microsoft held on to its legacy around Windows, it would have never gone this far. Today, it’s competing in the cloud-computing market with established companies, such as Google and Amazon Web Services, and managing to prove itself a worthy rival. To build capabilities fast to achieve this vision, Microsoft bought more than 40 companies that were all focused on the cloud, LinkedIn among them.

Nadella understood how the environment around Microsoft was changing and responded aptly. He realized the potential that was arising out of increasing computational power and employed that power in the service of the massive transformation that he led, powered by AI analytic and predictive capabilities. Microsoft’s move away from hardware products and operating systems into subscription-based services also effectively revamped its business model and ensured that Microsoft now has a healthy and constant stream of revenue. Moreover, with the increasing appeal of the open software trend, Microsoft weighed in and brought its software to the Linux operating system—the reason for one of Nadella’s presentation slides: “Microsoft loves Linux”. And very recently, Microsoft made 60,000 of its patents readily available to the Open Invention Network community (Linux’s community) as open source. By doing so, Microsoft abandoned billions of dollars in royalties.

A shuffling of the workforce

The transformation was not a smooth ride the entire way. It involved a serious reshuffling of the team in Microsoft, including senior and junior members. To reinforce his cloud vision, Nadella appointed Judson Althoff and Jean-Philippe Courtois, both believers in the cloud, as head of worldwide commercial business and head of global sales respectively. This followed Kevin Turner’s departure. There were also plans to sack thousands of sales employees in another major shift. Jim DuBois, who served the company for almost 25 years and was appointed in 2013 as the chief information officer, left the company in 2017, giving room for Kurt DelBene to assume the role of senior digital officer and handle the responsibilities left hanging.

An essential change in culture

Financially speaking, Microsoft has gained in market value during Nadella’s tenure thus far. Its share price has exceeded $100 in value after it was priced at below $50 four years ago. Its market capitalization today exceeds US$800 billion. Other financial indicators such as the price/earnings (PE) ratio at 49.99 and earnings per share (EPS) at 2.130 are also very healthy and attractive to investors. Its share price has surpassed that of Cisco, IBM andOracle. A virtuous cycle of productivity and attractiveness to investors and access to more public funds could prove very rewarding to Microsoft over the long-term, as it is approaching the $1-billion valuation milestone. 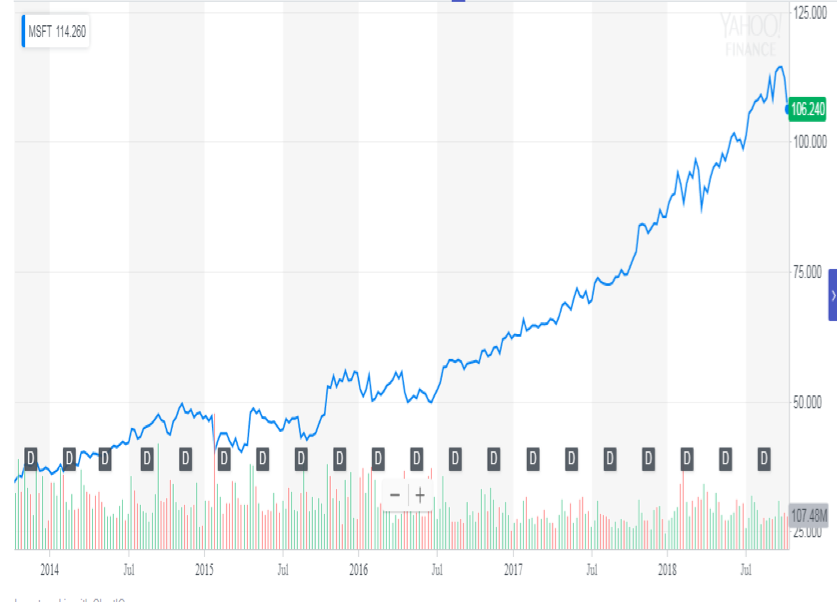 Microsoft’s recent success comes after a difficult period in the company’s life. Back in 2012, it had posted the first quarterly loss in its history. Competition from key players such as Apple, with its iPhone and iPad, did not help, nor did Microsoft’s focus on releasing a new version of Windows and its relentless attempts to bring Bing, its search engine, to the front. The lackluster quarterly figures signaled that Microsoft’s strategic orientation needed revision. It was evident that Microsoft was struggling in an industry in which it had been a pioneer. It took two years from that point for Nadella to come and change direction and implement a commendable transformation.

Nadella’s efforts are certainly worthy of praise, but they are not the only factors in the equation. Microsoft’s shift to Azure began under Nadella’s predecessor, Steve Ballmer. However, what Nadella did successfully was far beyond a mere focus on Azure. It was changing Microsoft at a holistic level into a company that is thriving in the 21stcentury. He made the company’s products more proliferate and useful, and its culture more positive. Nadella got many things right, and shareholders have been pleased.

How Can UK SMEs Take Advantage of International Opportunities?