Top Posts
International Women’s Day – An Industry Reflection
Consumer Privacy; Corporate Responsibility?
Why 2020 Could Be a Turning Point for...
Why are UK Landlords Leaving the Rental Market?
Hong Kong-China Unrest and the Implications for China’s...
Tactics for Keeping your Top Team Happy
Home Editor's Pick The Ties that Bind – Brexit Set to Strengthen M&A between Europe and Japan
FinanceThe C-Suite

The arrest of Carlos Ghosn, Chairman and CEO of Renault, in Tokyo on Monday 19 November has somewhat diverted attention away from ongoing diplomatic efforts to strengthen business ties between France and Japan.

On the day Ghosn was arrested over allegations of financial misconduct in Japan, participants of the 100-year anniversary celebrations of the French Chamber of Commerce in Tokyo, were told how France should become Japan’s first economic partner in the post-Brexit European Union.

The EU/Japan trade agreement should be ratified in the coming weeks and come into force before the UK leaves the EU at the end of March 2019. The agreement will remove EU tariffs of 10% on Japanese cars and 3% for most car parts while also scrapping Japanese duties of some 30% on European cheese and 15% on wines. It should also give European companies greater access to public tenders in Japan.

This represents a great opportunity to increase French-Japanese commercial partnerships and potentially M&A transactions for companies of all sizes, French secretary of state attached to the economy minister, Agnès Pannier-Runacher, said during a press conference in the French embassy in Tokyo on 20 November.

The story so far

Since the start of 2015 France has received 33 deals from Japan, worth a combined EUR 3.4bn, making it the third most targeted European country by deal count, according to Mergermarket data. With an 8.9% share of Japanese deals into Europe, France stands well behind the UK (22.3%) and Germany (16.9%). This must be rebalanced in favour of France in a post-Brexit EU, several French corporate executives and government officials agreed. 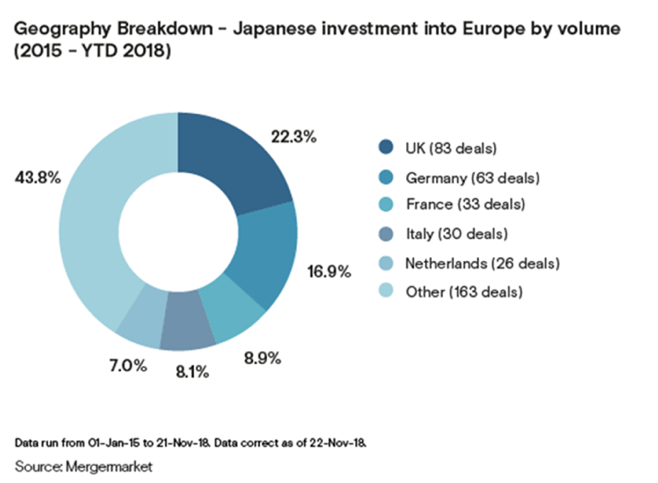 France attractivity for foreign investors is being restored through the reforms the French government started to launch since Emmanuel Macron election in 2017, corporate executives and French officials agreed during the 19 November Business Summit.

During the opening of the summit French minister Pannier-Runacher mentioned notably the reforms carried out by Macron’s administration on corporate tax, wealth tax and the French labour market, which make life for companies and foreign investors less “burdensome”

Paris is a global city looking to attract banks, asset managers and financial services in need of relocation in the EU after Brexit, Aeroports de Paris (ADP) CEO Augustin de Romanet said during the French Japanese Business Summit on 19 November. The planned relocation of the European Banking Authority in Paris is a key asset for France, he added.

A special – yet troubled – relationship

The alliance between Renault and Nissan Motor was supposed to be one of the best examples of the ongoing strengthening ties between the two countries. But while Nissan said in a statement that the long-standing Alliance partnership with Renault remains unchanged, the unanimous decision of its board to discharge Gohsn as Chairman of the Japanese carmaker is seen as part of wider power struggle between the French and Japanese sides.

Before his arrest, Ghosn was reportedly planning a merger between the two automakers, which Nissan’s board members were seeking to block. Now Nissan is reportedly looking to change what they see as an unbalanced capital relationship with Renault.

Ghosn could remain in detention until the end of the year because Tokyo prosecutors plan to rearrest him on a fresh claim of understating his income several newswires reported the 3 December. Nissan and Renault are yet to nominate a successor to Carlos Ghosn.

The French government is Renault’s largest single minority shareholder with a 15.01% stake and 28% voting rights whereas Nissan holds a 15% stake in Renault but no voting rights. Renault holds 43.4 % of Nissan, which owns a controlling 34% stake in Mitsubishi.

Beyond the current feud, French and Japanese officials who met in Tokyo in November agreed on the need to increase partnerships in the infrastructure and medtech sectors but also in AI, renewable energies, robotics and retail. 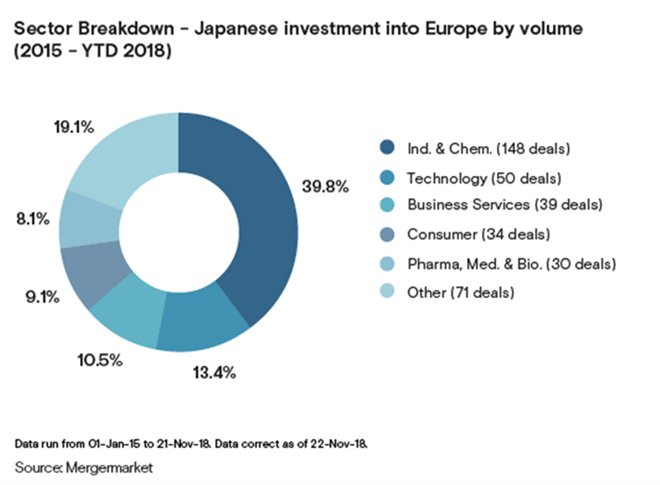 By 2050 Japanese citizens over 65 years old will represent 40% of the whole Japanese population, Chairman of the Japanese Research Institute of Economy, Trade and Industry Atsushi Nakajima said during the French Japanese Centenary Business Summit.

Tourism, a key sector for the Japanese government, is another area where French companies are looking to grab opportunities. Japan pledged to welcome 40m foreign visitors in 2020 vs. 28.7m in 2017, according to Japan Civil Aviation Bureau officials talking at the Paris InfraWeek event last October.

In 2016, French infra group Vinci took over operation of the two Kansai’s region airports in Japan for a period of 44 years. The group has also been named as a potential bidder for the operating rights of seven regional airports located in the Hokkaido Prefecture.

French companies have been the most active European investors into Japan by deal count since the start of 2015 with a total of eight such deals. Meanwhile, the UK and Germany lag behind with five deals into Japan each.

Despite its severity, the current crisis is unlikely to stop the momentum. In 2019, Japan and France will respectively chair the 14th G20 summit in Osaka in June and the 45th G7 summit in Biarritz in August. The G20 Summit on Financial Markets and the World Economy is held every year to discuss the critical issues affecting the global economy, and it brings together the members of the G7 (France, the United States, the United Kingdom, Germany, Japan, Italy, Canada and the European Union), as well as Argentina, Australia, Brazil, China, India, Indonesia, Mexico, the Republic of Korea, Russia, Saudi Arabia, South Africa, and Turkey.

Last October, French President Emmanuel Macron and Japanese Prime Minister Shinzo Abe met in Paris and agreed to push together for a stronger coordination between nations worldwide and to encourage multilateralism during those two summits.

The visit of the Japanese prime minister in France took place at the occasion of the 160th anniversary celebration of Japan and France diplomatic relations. The two countries pledged to further strengthen their economic, cultural and diplomatic ties. In the post-Brexit years, it will be interesting to see how the relationship is further consolidated.

Request for Pay has the Potential to Revolutionise Payments