Top Posts
International Women’s Day – An Industry Reflection
Consumer Privacy; Corporate Responsibility?
Why 2020 Could Be a Turning Point for...
Why are UK Landlords Leaving the Rental Market?
Hong Kong-China Unrest and the Implications for China’s...
Tactics for Keeping your Top Team Happy
Home Editor's Pick The Tangible Problem of Measuring Intangible Assets
Finance

The management of intangible assets (IAs) will determine the wealth of nations, but what cannot be measured cannot be managed. IAs can be defined as non-physical assets that generate income for their owners. This includes software as well as other intellectual capital. This definition might not always meet the accounting standards. While all IAs do generate income, they cannot always be counted as assets. Accounting standards often place additional conditions such as separability, which can lead to underestimation of IAs. This discrepancy between the actual nature and the accounting definition was not a problem when physical assets were the main economic drivers. Now, the situation is different.

The world’s four biggest companies by market valuation are Microsoft, Amazon, Apple and Alphabet. Each of these companies has a very high intangible-asset-to-tangible-asset ratio, and most of these companies have service and software as their main products. The status of these companies reflects a general global economic trend. According to The Wall Street Journal, the rate of intangible investment as a percentage of private-sector gross domestic product (GDP) overtook tangible investment in the mid-1990s. Since then, the percentage has only increased. The following figure plots the general trend for such investments. 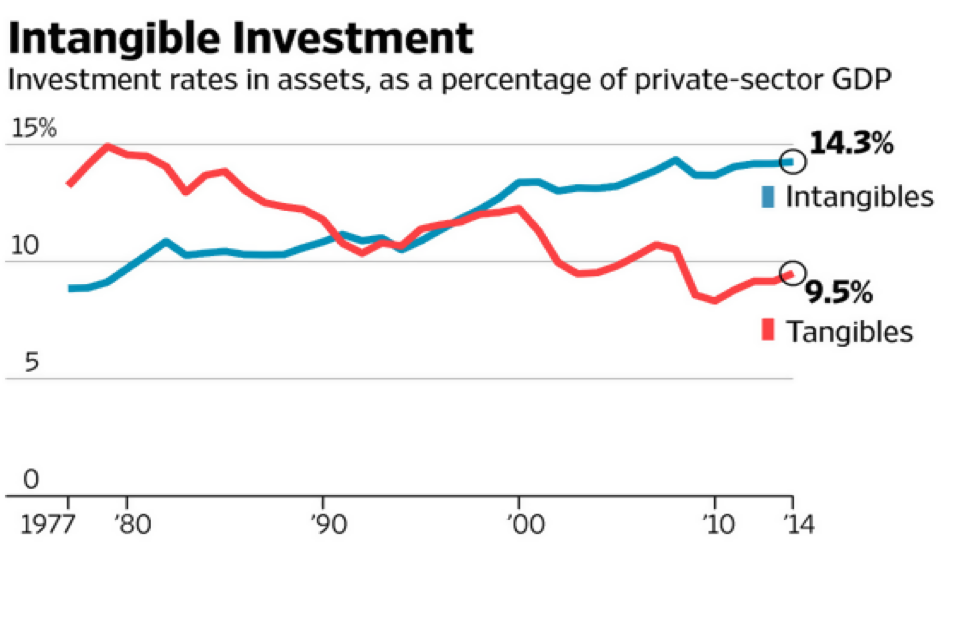 This trend also carries over into global investment portfolios, as demonstrated by the figure for nonresidential intangible investment relative to business-sector gross value added between 1977 and 2017. 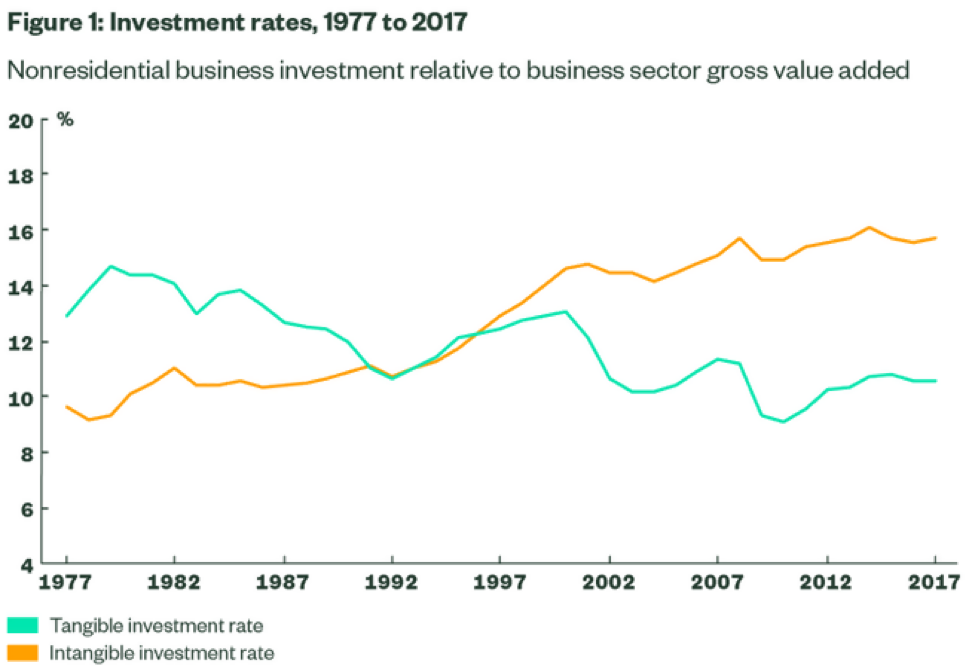 As is evident from the graph above, the rise of IAs will only strengthen as the Fourth Industrial Revolution changes gears into full speed ahead. Even hardware-heavy firms such as Bosch will have to rely on intangible investment in order to compete. Considering all of this potential, undervaluation of IAs comes as a big surprise. According to the National Bureau of Economic Research (NBER), as much as $800 billion of intangible investment was excluded from published US GDP data for 2003 alone. This is a striking figure considering that the United States is just one of many economic powerhouses.

It is very important to discuss the reasons for this undervaluation, because putting these assets on the balance sheet can yield many advantages. For a start, they can be used for deleveraging. With an increase in the total assets, a company’s total debt-to-asset ratio will decrease. For those firms that have a healthy leverage ratio, these assets can be used as collateral to secure more debt to promote their liquidity and expansion plans. Putting these assets on balance sheets would also provide investors with long-run rates of return (RORs) for intangible investments. These RORs would guide investment of IAs. All of these potential benefits beg the question of the different ways in which the discrepancy between reality and accounting sheets can be eliminated.

Current accounting rules do not fully capture the value of intangibles because of a number of mistakes. Almost all of these mistakes can be traced back to the fact that current rules were built for a world ruled by physical assets. In that old world, the intangible asset was used as a mere adjusting figure, while the physical asset was the real income generator. In such physical-asset-based economics, the old accounting rules served their purpose as good scales of measurement. However, with changing times, these rules have become an encumbrance on the growth of private capital.

The first of these archaic rules is not counting data as an asset. Technically, data does meet the definition of an asset, yet it is not counted as an asset on balance sheets. According to Gartner, data gives its owner six types of value of information: intrinsic (IVI), business (BVI), performance (PVI), cost (CVI), market (MVI) and economic (EVI).

Measuring this value can become a challenging feat. The main challenge with data valuation lies in the fact that the value addition of processing and application in real life leads to exponential changes in the value of the data. Furthermore, combining datasets can lead to massive increases in value. Facebook’s combining of data for different platforms is a good example of such combination. Furthermore, the depreciation of data is not linear and may not occur at all if longitudinal data is being collected. Yet, at the same time other data can lose value within seconds. This varying range of depreciation has to be accommodated using some measure. Lastly, legislation might place a share of ownership with the customer. To solve these issues, a number of solutions have been recommended.

According to David Lyford-Smith, a technical manager at ICAEW IT Faculty, capitalized development expenditure rules (CDERs) can tie the value of data to other hard-capital assets. However, this method makes the mistake of using an external measure for valuing data. Another measure could be measuring the output of data scientists. On the other hand, such measures would not be accurate representations of the output because the value of insights is correlated with computing power. Ever cheaper computing power would reduce the value-per-insight for data scientists. Many other measures have been recommended to measure data. These potential measures will have to deal with two issues of standardization of data and information asymmetry in transactions concerning the sale and purchase of data. Valuation is an issue that is not local to data alone.

Currently, all IAs are valued at acquisition. Under the current generally accepted accounting principles (GAAP) rules, some IAs such as brand value can be assessed during merger and acquisition (M&A) activities. These acquired IAs may or may not be amortized, depending on their nature. However, when it comes to IAs that are produced organically within the firm, there is no such method of measurement. This weakness is one of the reasons why industry watchers are surprised by high acquisition prices, such as the $19-billion price tag for WhatsApp. Such an accounting mechanism forces smaller firms to sell out to larger firms since they can get money for their IAs only during acquisitions. This reduces short-term financing and reward for these startups.

Organic creation of IAs can be captured by booking expenses on IAs as investments. Currently, expenditure on research and development (R&D) is expressed as an expense. This would have been fine if revenue from R&D came within the same period. However, returns on R&D often come in the next period, or even further into the future. This leads to an understatement of short-term assets. The understatements force chief executive officers to make a choice between balance-sheet status and vital innovation. This does not have to be a tradeoff. A potential solution lies in counting R&D as an investment and then amortizing that investment over a given time period.

Another method of measuring the value of organically produced IAs includes measuring return on investment (ROI) for IAs. ROI on IAs can be found in the concept of the innovation premium. Hal Gregersen, Jeff Dyer and Clayton M. Christensenin their book The Innovator’s DNA: Mastering the Five Skills of Disruptive Innovators recommend that the ROI on IAs should be the difference between explainable income from the tangible assets and the actual income of a business. The difference between the two values is called the innovator’s premium. A more polished version of this measure can be used to measure the value of internally generated IAs.

Currently, the International Financial Reporting Standards (IFRS) and GAAP have different lists of acceptable IAs. This can become a real obstacle as major economies around the world use both systems. Such differences would force multinational corporations (MNCs) to have different asset valuations across borders. In addition, these different definitions can become a hurdle in international finance (IF) as assets for one company might not be counted as assets for their financiers using another system. This discrepancy can be eliminated by distributing assets into three broad categories of assets, knowledge and options. Both GAAP and the IFRS can agree on counting some of these categories as international assets. This will allow both to continue their respective principles-based and rules-based systems without impeding IF.

In today’s knowledge-focused economy, IAs are the secret to success. Unfortunately, the accounting for this secret is shrouded in mystery. This mystery has been created because currently, the market cannot measure the value of data and internally created IAs. Furthermore, the IFRS and GAAP themselves are at odds with each other on the definition of these assets. Clearing these accounting obstructions will allow IA-holders to fully capitalize on their assets. Once these assets are placed on balance sheets, IA-holders will see a number of benefits. The potential advantages include deleveraging (because of asset-size increase), better measurement of IA ROI and reduction in “kill-zone” activity within the tech sector.

Indeed, what cannot be measured cannot be managed. This applies to IAs, the management of which is of paramount importance to the economy of the future.

I would like to connect with the author of this article. Thank you – Matt