Top Posts
International Women’s Day – An Industry Reflection
Consumer Privacy; Corporate Responsibility?
Why 2020 Could Be a Turning Point for...
Why are UK Landlords Leaving the Rental Market?
Hong Kong-China Unrest and the Implications for China’s...
Tactics for Keeping your Top Team Happy
Home Editor's Pick The Rise of Libra and Potential Challenges
Finance

Facebook has decided to launch a digital currency named Libra. It has given various details about the currency via its currency whitepaper. The deployment of Libra will have serious implications by bringing new individuals into the financial net all over the world. Libra has been designed to succeed where other crypto-currencies have failed. Yet, like all new things, Libra will have to overcome certain obstacles to ensure its win over strict governments and skeptical consumers. So, let’s start at the beginning.

Facebook has finally announced its aspirations to launch Libra, a crypto-currency. Although a complete blueprint for Libra is still awaited, the Libra whitepaper gives important details on the new blockchain currency. First, the currency will be built on a secure and reliable blockchain that is said to be scalable. There are different types of blockchain currencies, and Libra will be a stable coin. This means that the coin will be like the gold-standard dollar, as it will be backed by assets. As of now, there is no definitive news on what these assets will be or where they will be secured.

In addition, Libra will be commandeered by Facebook initially. However, after a certain time, the coin’s administration will be taken over by a non-profit body called the Libra Association. To keep decisions somewhat democratic, the association will use the LibraBFT consensus mechanism. Meanwhile, on the backend, the Move programming language will provide the coding for the blockchain currency. Also, as with all currencies, Libra will use a digital wallet; the Calibra wallet will be used to interact with Libra. Lastly, the blockchain will start from a centralized permission-based system moving to a permission-less system. After looking at these details, the move towards a digital currency does not sound all that out of place.

After all, this was not a complete surprise, since the internet giant had announced the establishment of a blockchain division. The assignment of David Marcus as the head of that division underlined the importance of the agency. David Marcus previously oversaw the development of important projects, such as Facebook Messenger. Yet, at the same time, the move was unexpected on many fronts.

First, trust in the issuing authority is one of the cornerstones of any successful currency issuance—but Facebook spent 2018 jumping from one scandal to the next. These media crises included reneging on its promise to not combine the data of WhatsApp and Facebook and the infamous Cambridge Analytica scandal. These scandals showed Facebook’s intent to flaunt regulatory and governmental reservations in its pursuit of ever-increasing bottom lines. Nevertheless, the company had the audacity to launch a crypto-currency in the middle of all of this controversy. Understanding this gall requires considering the implications of Facebook launching a crypto-currency.

Upon closer inspection, it makes sense for Facebook to launch a crypto-currency at this point in its evolution. The raison d’être for Libra lies thousands of miles away from its headquarters in California, USA. The developing world, especially India, largely goes unbanked. Around two billion people in the world don’t have bank accounts. As the figure below illustrates, most of these individuals outside the financial net reside in developing countries. The countries marked green have populations in which less than 15 percent of the total have a bank account. 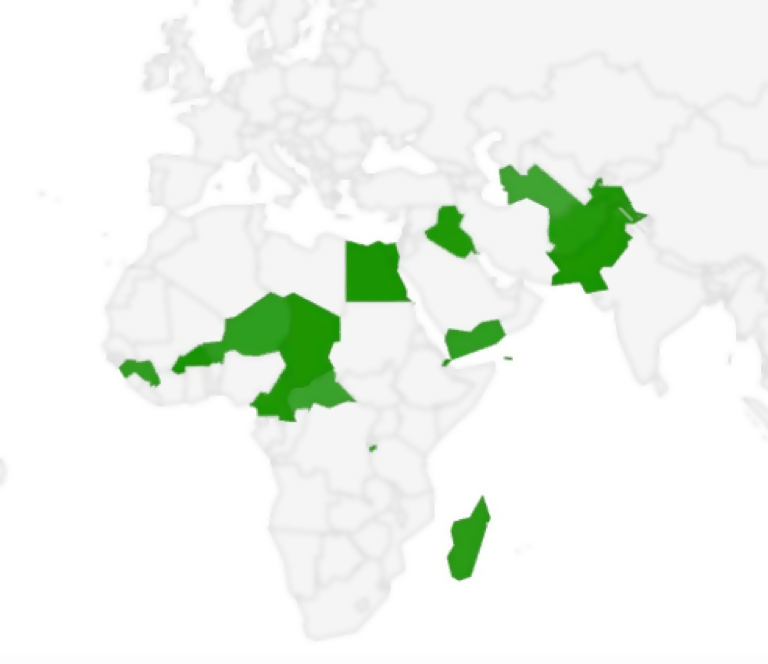 Now, these individuals might not have bank accounts, but they certainly do have other networks that connect them. Specifically, they have access to Facebook. This group is growing every year, with the number of internet users in 2018 growing to more than four billion, a seven-percent year-on-year increase. Within these developing countries, Facebook is especially eying India, which has more than 400 million WhatsApp users, many of whom don’t have bank accounts. Facebook has already integrated Instagram, Messenger and WhatsApp. This means that Indians can possibly complete Libra transactions via WhatsApp. Such a move would place Facebook in a contender ship for the upcoming fintech wars. However, this still does not satisfy the critics of crypto-currencies.

Second, Facebook will avoid the critical volatility of other blockchain-based currencies. A currency has to have three characteristics—namely, medium of exchange, unit of account and store of value. Blockchain currencies fail at the store-of-value function because of their fluctuations. Libra hopes to avoid this mercuriality in value by issuing a collateralized coin. This means that the Facebook currency will be issued backed by assets. Furthermore, these assets will be geographically distributed to reduce financial risk. Yet, at the same time, Libra has failed to address many key issues that may stop it from becoming a truly global currency.

Obstacles on the path to global domination

Libra will face technological and soft obstacles in its path towards becoming the world’s currency. The first are the trust issues regarding the issuer of the currency. People’s trust in Facebook in light of recent controversies has taken a deep plunge. Reportedly, people trust bitcoin more than Libra. This trust deficit really undermines Facebook’s network advantage that it gains via its large user base.

Apart from the psychological trust deficit, Libra will also have to contend with technological difficulties. These difficulties arise from the novelty of the techniques to be used by Facebook for its currency. Libra will use an entirely new method of forming blocks for the blockchain. Although this technique is expected to go through rigorous testing, its performance in the real world will still be uncertain. Similarly, the currency is being written in an entirely new language called Move. This will increase the programmer’s likelihood of making mistakes. Such mistakes will lead to expensive consequences as it is expected to be used by tens of millions of users.

Unfortunately, technological concerns might be the least of Facebook’s concerns when one considers the potential legal and regulatory concerns regarding the deployment of Libra. The legal complications stem from its potential to be misused by criminals involved in illegal activities or tax dodgers looking for a way to move money across borders—although Libra will not be unique in this regard, as crypto-currencies have been used already to support illicit activities such as cyber-crime and the drugs trade. However, unfortunately for Facebook, this time there is a visible body that can be held accountable for its misuse. This means that Facebook will have to consider the risk of facing legal action.

Of course, the law does not stop at legal concerns only, especially after one considers the fact that monetary policy has been considered to be the territory of banks. Jerome Powell, the chairman of the United States Federal Reserve, quipped that “Libra raises many serious concerns regarding privacy, money laundering, consumer protection and financial stability” while facing the Senate Banking Committee and the House Financial Services Committee during his two-day semiannual Congressional testimony in July. He further said that Facebook’s proposal cannot go forward unless these serious concerns are addressed. If Libra is forced to take a banking license in order to deploy Libra, it will expose the currency to overarching global banking regulations.

Aside from regulations, the nature of Libra’s assets will also become a big issue later on. Currently, Libra is expected to maintain assets in geographically dispersed countries. There are two possible ways Libra could decide its asset allocation. First, it could have a truly global asset distribution that will include countries from the global south as well as the global north. Otherwise, it could have asset ownership in the West alone. Both of these asset-allocation strategies have their own pitfalls. If the assets are located all over the world, they could trigger sanctions clauses in the current partisan global climate. However, if the assets are located in the West alone, this could expose the currency to the interconnected business cycles of Western countries. This, in turn, could undermine the stability of the Libra in the long-run.

How David Marcus deals with all of these issues will determine the fate of the digital currency.

Libra has the potential to become a major world crypto-currency. In order to counter the fluctuating nature of crypto-currencies, Facebook has decided to back Libra with assets. However, due to the scale of this project, a number of issues have arisen that Facebook needs to deal with. These include legal, technological, trust and regulatory challenges. The success of Facebook in dealing with these challenges will determine the fate of Libra and other crypto-currencies that follow it.