Top Posts
International Women’s Day – An Industry Reflection
Consumer Privacy; Corporate Responsibility?
Why 2020 Could Be a Turning Point for...
Why are UK Landlords Leaving the Rental Market?
Hong Kong-China Unrest and the Implications for China’s...
Tactics for Keeping your Top Team Happy
Home Editor's Pick The Need for Carbon Capture and Its Possible Solutions
Finance

Emissions of greenhouse gases (GHGs) have played an important role in exacerbating climate change. Within GHGs, carbon dioxide retains a special place due to its sheer volume and effects on climate change. In order to meet the Paris Climate Change Agreement goal of keeping the rise of the global average temperature below 1.5 degrees Celsius, carbon capture and sequestration (CCS) will have to play an important role. However, CCS can only play its role to fruition if economic catalysts such as carbon taxes are introduced into the market.

The need for CCS technology

According to an IPCC (Intergovernmental Panel on Climate Change) report released in October 2018, the concentration of carbon dioxide in our atmosphere has reached 400 parts per million (ppm), which is significantly above the safe levels of 350 ppm. The report also focuses on the adverse effects of global warming in our environment and the target of the temperature increase to remain below 1.5 degrees Celsius. In addition, it also suggests reducing carbon-dioxide emissions to net zero by the year 2050. This ambitious goal would require ”far-reaching transitions”, not only in terms of how the energy is produced and consumed but also the deployment of negative-emissions technologies (NETs), such as the recapture of carbon from the atmosphere. Greenhouse gases are vital for our planet as they conserve energy and keep temperatures mild in order for living things to survive. However, with changes in human practices, GHG emissions have rapidly increased in the environment, affecting the global temperature and ecosystem. Therefore, the reduction of carbon emissions in the atmosphere is the need of the hour.

Further economic and industrial growth in the global-south means that carbon emissions are expected to rise in the long-run. Serious steps need to be taken in order to preserve the climate for future as well as current generations. As discussed earlier, one of the major threats to our environment are the excessive emissions of greenhouse gases and air pollutants. Research shows that 56 percent of carbon-dioxide (CO2) emissions are from fossil-fuel combustion. Another climate expert studied the relationship between carbon-dioxide concentration levels in the atmosphere and the temperature at the earth’s surface. The time series data of that research concludes that the temperature of the earth increases significantly with increasing levels of carbon emissions. Therefore, a positive correlation exists between the two that is expected to grow at a constant rate if carbon emissions are not reduced. Figure 1 below represents the findings of the aforementioned study.

CCS is the most efficient technology for the reduction of CO2 emissions. The concept is to enable the production of biofuels by reducing carbon-dioxide emissions, thereby controlling the environmental temperature. Consequently, while using CCS technology, it should be taken into account that the storage period of CO2 should exceed the peak time of fossil-fuel exploitation. So, if CO2 emissions are to be released into the environment, it should be done after a complete shift to renewable sources.

Various solutions have been proposed over the past few decades to reduce the amounts of carbon in the atmosphere, such as deployment of solar power and wind panels, reducing dependency on vehicles and building alternate transportation mediums, scaling up the production of energy-efficient solutions, restoring natural landscapes such as through reforestation programs to reduce carbon emissions, and preventing the usage of products that have high hydrocarbon levels such as refrigerators and air conditioners. There is a discussion about new technological advancements, such as CCS. Many researchers and experts tend to believe that the target of keeping the global warming rise below 1.5ºC cannot be achieved if such modern and futuristic technologies are not brought into practice.

Carbon capture can be described as an integrated combination of technologies that prevent the emission of carbon dioxide into the atmosphere from the usage of fossil fuels. This technology’s commercial operations have been in practice for the past 45 years with positive results. Carbon capture and storage is a simple phenomenon and is comprised of three basic steps. First is the capture of carbon dioxide. At this stage, CO2 is separated from the gases produced at large-scale industrial facilities. The second stage involves transportation of the captured carbon to geological sites. This transportation of CO2 is done via pipelines, ships or trucks. The third and the final process comprises storing the CO2. At this stage, CO2 is injected deep into the ground for rock formation. Figure 2 below depicts the aforementioned process of carbon capture and storage. 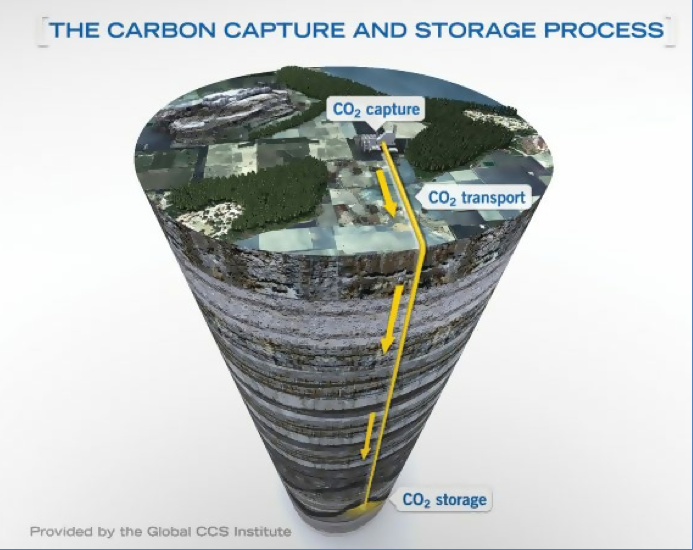 Potential markets for the CCS technology

Currently, the major contributors to carbon-dioxide emissions in the industry are the fossil-fuel-fired power plants. Therefore, prioritizing the application of CCS technologies to such power plants—existing as well as new—is a natural conclusion. However, implementing CCS requires financial investment. That financial investment will only become a rational action for businesses if governments implement taxation on carbon emissions. The same holds true for applying carbon-capture technologies to existing plants, which require not only extra space but also extensive integration for capturing carbon in their already running plants.

Seeing this potential, the private sector has been sharpening its investment tools for implementing CCS technologies. The United Kingdom alone has pledged to invest US$33 billion to US$66 billion for the period 2010-30. These investments cover industrial facilities such as steel production, fossil-fuel power plants and gas-processing plants, since these are the major sources of carbon emissions. The higher cost of CCS-integrated industrial facilities can be partially justified by the creation of new jobs. The employment opportunities can vary from services (legal, commercial operations, marketing, project planning and management, financial planning, sourcing and procurement) to manufacturing and construction of CCS facilities

In addition, the installation of CCS technology can play a vital role in providing energy security. Approximately 25 percent of the world’s primary energy is provided by coal in the form of electrical energy. This usage is expected to grow in the future, considering that coal is the most abundant and cheap raw material available in the market and can be moved easily from one place to another. The application of CCS to coal-fired power plants is essential to not only meet global GHG-reduction targets but also to provide energy security for many countries.

Additionally, carbon-capture technologies will play a pivotal role in reducing the economic costs of climate change. Policymakers and climate experts tend to believe that the benefits of pre-action outweigh the economic costs of post-action. Moreover, if the appropriate actions are not taken in a timely manner, the costs and risks of climate change could lead to a drop of 5 percent in the gross domestic product (GDP) annually. If risks tend to expand, the rate could lead to a reduction of 20 percent of GDP annually. The costs of taking actions to reduce greenhouse-gas emissions to fight climate change could be limited to 1 percent of the global GDP annually.

One of the most realistic and least complex approaches to reducing GHG emissions and encouraging the use of CCS technology is to put a price on carbon emissions. The carbon tax has been the talk of the town over the past few years to alter usage behavior. If applied, carbon taxes will not only encourage consumers (both manufacturers and domestic customers) to switch to low-carbon, efficient raw materials but will also allow the development of CCS technologies to reduce emissions. The major purpose here is to cut the cost of the extra tons of emissions. Another solution to price carbon is to adopt the cap-and-trade approach. This term refers to a market in which the government sets the limit (or cap) on CO2 emissions, and firms can trade their unused portion (or limits) to other firms that are struggling to abide by their available limits.

Various climate experts have suggested design elements for the cap-and-trade method. These are primarily composed of suggestions on how to bank and borrow emission permits and how these will interact with other markets, subsidies and taxes. In addition, they also suggest mechanisms to keep permit prices under control, from either rising too high or falling too low.

Managing climate change has become an important question for the global comity of nations and bodies. Carbon-dioxide emissions play an important role in this common problem. CCS forms an important part of the answer to the question of how to control CO2 emissions. Governments should consider the economic benefits of CCS when encouraging CCS technologies by implementing programs such as carbon tax and cap and trade.

Exporting Water for Dollars: Reorientation in a Dry World

The Big Four and Their Breakup: Is It a Fix or a Witch Hunt?