Top Posts
International Women’s Day – An Industry Reflection
Consumer Privacy; Corporate Responsibility?
Why 2020 Could Be a Turning Point for...
Why are UK Landlords Leaving the Rental Market?
Hong Kong-China Unrest and the Implications for China’s...
Tactics for Keeping your Top Team Happy
Home Editor's Pick The Impact of US Inflation on Global Markets and Economies
Finance

The Impact of US Inflation on Global Markets and Economies

Below is a graph showing the purchasing power of $100 in 1947 (post-World War II) in comparison to the same in later years. A downward trend in purchasing power seems to be overwhelmingly prevalent. 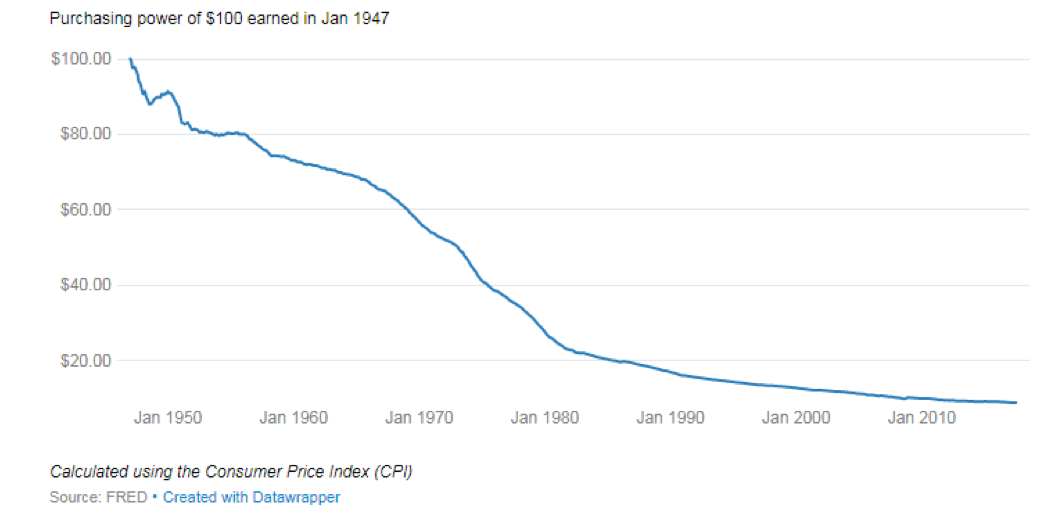 But when we consider the US exchange rate over a somewhat similar period, we see an entirely different story. The exchange of the US dollar to a basket of currencies can reveal the extent to which other currencies have gained or lost value relative to the dollar. The US Dollar Index gives a good illustration of those fluctuations in value.

In particular, the dollar gained the most value following the Nixon shock in 1971 (the end of the Bretton Woods agreement and the peg between the dollar and gold). During that period, the dollar gained the most value as the US Dollar Index rose from around 90 to around 165 points (183 percent) from 1971 to 1983. However, during that same period, the purchasing power of the US dollar dropped, and the dollar inflated by around 145 percent. This was a clear sign that the inflation in the US dollar had been effectively transferred to other currencies, at least partially. Afterwards, the US dollar returned back to its previous levels.

The historical US Dollar Index can be seen below. A simple comparison with the purchasing power chart shows that the exchange rate of the dollar to other currencies did not decline in a similar fashion. In fact, it seems to be fluctuating around a somewhat static average. Three significant rises in the US dollar can be seen on the chart, signifying the strengtheningof the US exchange rate. In fact, these rises show many bouts of strength, representing major batches of inflation to other currencies and the global economy. And other than the period following 2008, inflation in other currencies does not seem to explain these rises. 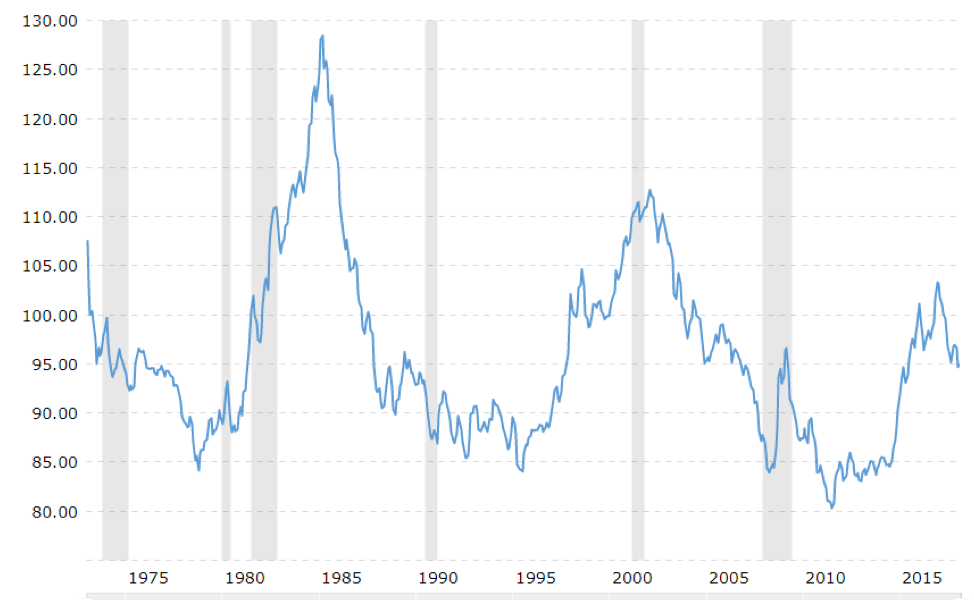 Aside from the periods when the dollar was strengthening against other currencies, its inflation rate and exchange rate seem to go hand-in-hand. A survey in Hafer discovered that there is a negative correlation between the dollar’s exchange rate with the Japanese yenand US prices. The evidence shows that for every 2 percent increase in US domestic prices, the exchange rate of the dollar to the JPY decreases by about 10 percent. The USDJPY rate was used in this study given its importance. However, other currencies were not covered, so this study does not capture the full picture.

Whenever the US Dollar Index strengthens at a faster pace than inflation, other currencies suffer, albeit the euro stands to suffer the most given its bigger weight in the index. Recently, the US Dollar Index increased from 2011 to 2017, only to begin falling at the beginning of 2017, and it has been falling ever since. During the same time of the fall beginning early last year, US equities showed a significantrise. However, the relationship between inflation and equities is a complex one. On the one hand, it leads to increases in nominal valuations, but on the other, it leads to higher discount rates—and investors demand higherrisk premiums to be compensated for the additional risks. What’s more, often it is not the actual inflation figures that move the market but rather the variances between the actual figures and the expected numbers. Empirical studies have shown that there is a positive correlation between expected inflation and local currency equity returns, and a negativecorrelation between unexpected inflation and local currency equity returns.

But the effects exceed local US markets to global markets. Just recently in February 2018, major European and Asian indices declined significantly on fears of rising inflation in the United States, prompting an imminent interest-rate hike. Oftentimes, the Federal Reserve leads other central banks in terms of its monetary terms. Investors are well aware of this, and thus monetary policy in the US is a global concern.

Factors behind the dollar’s hegemony

The dollar’s hegemony remains strong, despite challenges in previous decades from major currencies such as the pound sterling, Japanese yen and Deutschemark (before the introduction of the single European currency). A key factor behind this hegemony is that main commodities including energy and precious metals—such as oil, gold and silver—are all priced in dollars. The demand for the dollar remains strong regardless of its fluctuating purchasing power.

Often countries’ gross domestic products (GDPs) aredenominated in US dollarsto facilitate comparison. Furthermore, the US remains the biggest global economy in terms of GDP. Its imports are also larger than its exports, making it a net-importer. And thus the outbound dollar payments to the outside world are bigger than the inbound payments, making the amount of dollars exiting America to the outer world bigger than the amount coming in. As a result, America can effectively buy products and services for the money it prints.

Economically speaking, the rate of increase in wages should move in tandem with the rate of inflation to maintain balanceand offset the effects of declining purchasing power. Without this balance, purchasing power is affected, and the demand forproducts declines. When the supply adjusts with decreased output, GDP growth suffers.

In an international context, economies that import more from the outside world stand to suffer the most from the bouts of inflation in the US dollar.

The role of the US dollar in international trade

There are multiple ways the value of the US dollar can affect global financial markets. The reason is because thesize of international trade denominated in US dollars is quite large (higher than approximately 70 percent in recent years), and the remaining percentage is largely between countries in the European Union. The rest of global trade in other currencies is very small.

The effect of inflation on other countries

Studies have been conducted on the impact of US inflation on specific countries. One study, for example, outlined how US inflation has an effect on Australian inflation. The studied model incorporated variables such as US fiscal policy, monetary policy as well as inflation. The results showed that there have been accounts of expected rises in US interest rates based on higher than expected inflation numbers causing declines in Australian financial markets. Another study that analyzed data from 2008 to 2013 found that there was a strong correlation between inflation in the dollar (dollar prices) and inflation in Pakistan. Other factors in that study in addition to the dollar price included gold and petroleum prices, both of which are denominated in US dollars. The inflation in Pakistan during that period affected the economic system negatively.

US inflation likely has an effect on many other economies, especially those with higher rates of imports to exports and higher dependence on imports in local consumption.

The fiscal and monetary policies of the US are hardly domestic issues. They involve the entire global economy in their consequences. The contagion effect is very high when the independent variable is US inflation. Oftentimes, shocks in equity and bond markets follow, as well as fluctuations in the purchasing power of foreign currencies. The effects usually are most felt in poorer countries with hardly any cushion to offset the effects. But nonetheless, some analysts do predict that the days of the dollar as the main global currency are coming to an end,and that we may soon see other currencies given similar weight and importance in international markets.