Top Posts
International Women’s Day – An Industry Reflection
Consumer Privacy; Corporate Responsibility?
Why 2020 Could Be a Turning Point for...
Why are UK Landlords Leaving the Rental Market?
Hong Kong-China Unrest and the Implications for China’s...
Tactics for Keeping your Top Team Happy
Home Editor's Pick The Big Four and Their Breakup: Is It a Fix or a Witch Hunt?
Finance

The Big Four and Their Breakup: Is It a Fix or a Witch Hunt?

The big four (B4) companies have been mired in a number of scandals that have tarnished their previously unscathed reputations. As a result, regulatory and political bodies want to place the big four on the chopping board. The proposed breakup will have advantages and disadvantages. The following discussion will allow the reader to see that the adverse effects of a breakup will overshadow the benefits.

Big events for the big four

The big four companies consist of KPMG (Klynveld Peat Marwick Goerdeler), Ernst & Young (EY), PricewaterhouseCoopers (PwC) and Deloitte. These companies provide a wide range of consultancy and tax services to the economic elite (Fortune 500, FTSE 100, FTSE 250). A non-exhaustive list of their services includes audit, taxation, corporate finance, management consulting, actuarial and legal services. Between the B4, all but one of the United Kingdom’s top 100 firms used their services for audit businesses. These companies have been known for their quality of service and trust. However, lately, that trust has been eroded by a number of scandals. In particular, two scandals can be taken as samples of what is wrong with the industry.

The first scandalis related to the collapse of the United Kingdom’s premier outsourcing giant Carillion. Its collapse made loud splashes in the UK’s domestic politics because of its involvement with the government and because of its status as an employer of almost 20,000 workers. After clearing the rubble left by the outsourcing mammoth, it was found that the B4 had billed Carillion a total of £71.6 million between 2008 and its collapse in 2018. The oligopolistic nature of the industry was further betrayed by the fact that only PwC was cleared for liquidating the assets of Carillion, because the other three were wrapped up in conflicts of interest. Furthermore, the lack of warning by KPMG (auditor for Carillion) was a further source of anger for the B4. The chair of the House of Commons’ Business, Energy and Industrial Strategy Committee, Rachel Reeves, pointed to “cozy relationships” between the Carillion management and the auditors as the reason for the lack of forewarning from the formerly respected auditor.

The second scandalwas related to another British giant, British Home Stores (BHS).The company collapsed with a £1.3-billion debt and £570-million pension deficit. As a result, more than 11,000 jobs were placed at risk. In addition, more than 20,000 pensioners were also exposed to the company’s failure. This collapse was the result of a series of bookkeeping robberies by the top management that were cleared by the company’s auditor, PwC. As a result, PwC was fined a whopping £6.5 million in addition to a separate fine of £500,000 to the individual auditor, Steve Denison.

Unfortunately, these are not the only scandals, and the UK is not alone in its reservations about the trustworthiness of the B4. The following discussion will use the debate within the UK to represent global business qualms—repeating the issues for each country would be redundant because of the similarities of the issues. As such, the reactions of UK authorities can also be taken to be the similar potential responses of other governments all over the world.

Such claims have only sharpened the knives of the Competition and Markets Authority (CMA), the regulator for the UK services industry, which has proposed breaking up the B4 on the basis of a number of justifications. The CMA has not been alone in its formal criticism. The Business, Energy and Industrial Strategy Committee has proposed the softer measures of market caps for the giants. Some other soft measures could see the B4 publishing their financial documentsto assure the public as well as the regulator that non-audit functions are not subsidizing audit functions. Government representatives essentially believe that the market has become an oligopoly, in which conflicts of interest and market power are compromising the quality of the information received by investors and managers. Their recommendations can be compared to that of an anti-trust body. These actions are justified on a number of arguments that are discussed below. 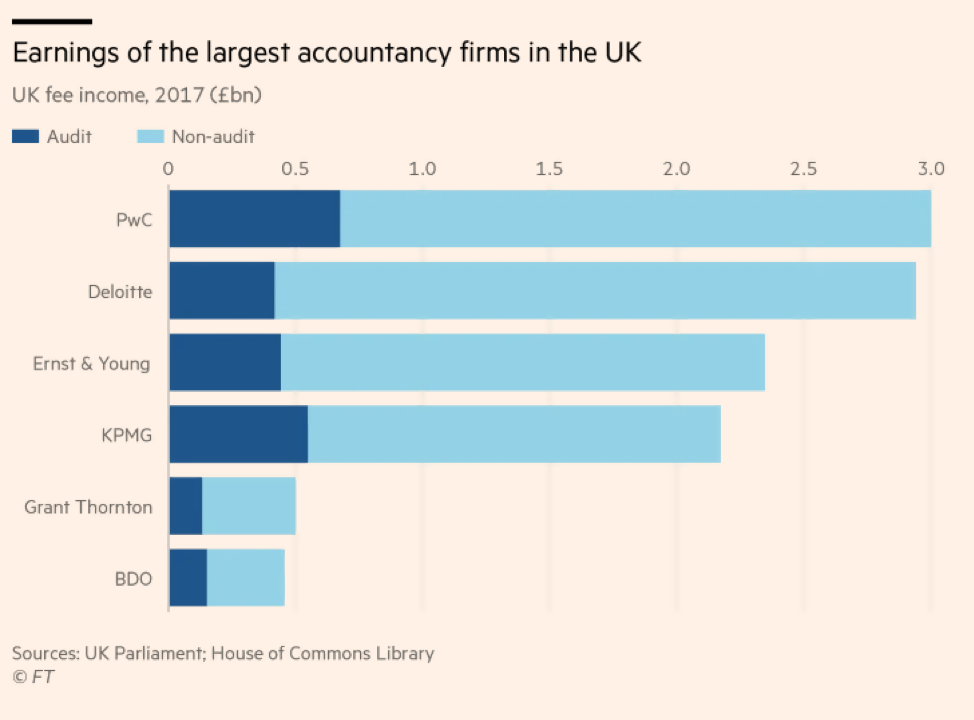 Such a conflict of interest can be removed if the audit and non-audit departments of the businesses are separated and operate as individual bodies. They can still share some resources, such as information technology (IT).

The second argument for the breakup of the big four relates to increasing competition in the industry. The following image shows the market share of the big four as compared to the next five industries for the years 2013-17. 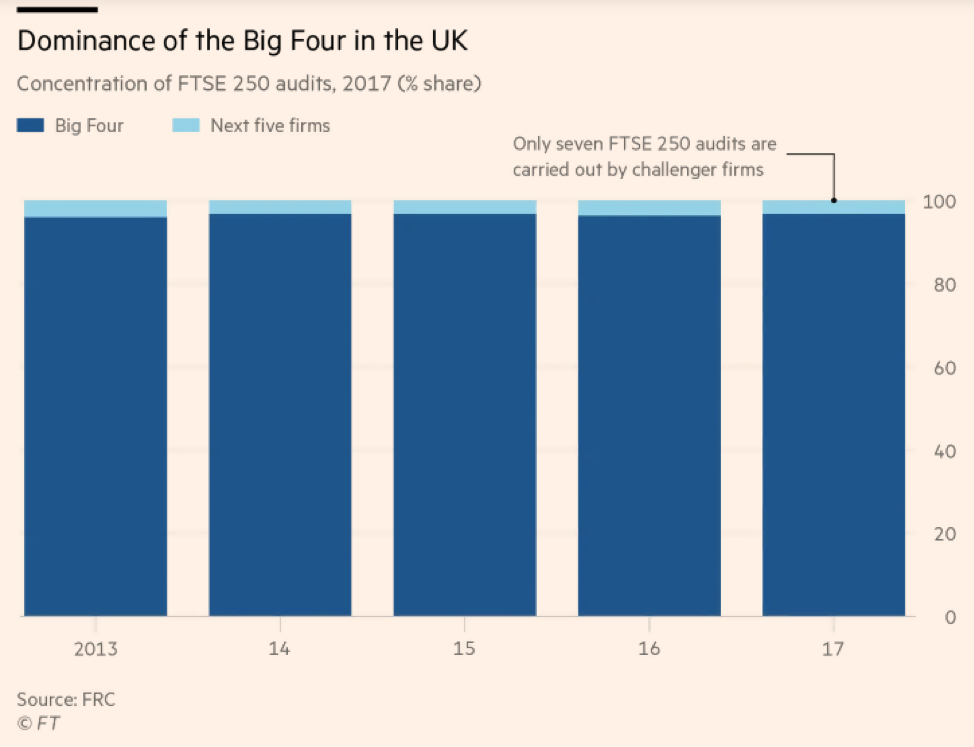 The above image clearly shows that the B4 have consistently maintained their dominance in the industry. Such dominant power can lead to possibilities of collusion and monopsony. Collusion could see the companies in a possible price-fixing scenario, while monopsony could lead to sub-optimal wages for the workers employed by the B4. A breakup would reduce the probability of such welfare-damaging agreements.

The third argumentrests on specializationin terms of work culture. An audit work culture approaches the customer with an eye of suspicion, while a non-audit culture has to approach the customer with an attitude of service and empathy. Therefore, it is argued that separating the two types of teams would make it easier for both of these businesses to perform their desired functions. Although these arguments sound convincing, they have to be weighed against the possible repercussions of breaking up the B4.

Potential shrapnel from a forced breakup of the big four

There is a reason why the B4 are given the respect and market share that they hold. That is because their size gives them some unique advantages that will be reduced if the B4 are forcefully broken.

First, the breakup will reduce the economies of scale in services that are sine quanon to providing high-quality services. According to Deloitte, being a single firm allows it to employ more than 2,000 tax specialists, which permits a big firm to deliver specialized services. Employing the same 2,000 specialists can become burdensome if it is forced to break up its operations.

Second, it might compromise the quality of auditing services. This is because the experience gained in servicing one firm is often transferrable to the servicing of another company. Therefore, it stands to reason that reducing the variety of customers will have an adverse effect on the quality of services given to all of the other customers. One can liken it to network effects for customers.

Third, such a move does not prepare the audit as well as non-audit industries for the future of the services sector. The future will see a lot of functions being taken over by artificial intelligence (AI). AI has to be trained on datasets, and the bigger the dataset, the better the AI. Breaking up the B4 would reduce these datasets. This automation would also weaken the work-culture argument for the breakup of the B4, since humans are expected to specialize in empathy-dependent jobs.

All in all, the breakup of the B4 might sound like an attractive option in a vindictive environment. However, careful analysis, done with cooler minds, reveals that the costs of such a move might outstrip the benefits. On the other hand, it would be foolish to consider that there isn’t an elephant in the room. The B4 have repeatedly failed the trust of the public as well as that of the government, and transparency could be a good step on the long road towards recovering that trust.

Housing Costs: How They Undermine Western Prosperity and How to Fix the Problem