Terrorism financing has been a serious concern for the global financial community because of its potential for inviting fines and sanctions. The following discussion explores the sources of terrorism financing, challenges related to tracking of terrorism financiers, the steps that central banks and international organizations can and do take to combat the issue as well as the future risks associated with virtual currencies.

What is terrorism financing?

Terrorism financing is a common yet nebulous term that needs to be clarified. For the following discussion, the term refers to the process of generating funds for terrorist activities. These funds originate from legitimate as well as criminal activities. Terrorism financers use techniques that protect the identities of the sponsors as well as the beneficiaries of the funds. To move funds from one place to another, terrorists use informal value-transfer systems, formal banking systems, hawalas and hundis (an informal mechanism of transferring money without any formal paperwork) and the traditional method of transferring assets, i.e., using smuggling routes to physically transfer gold, cash and other valuable belongings. 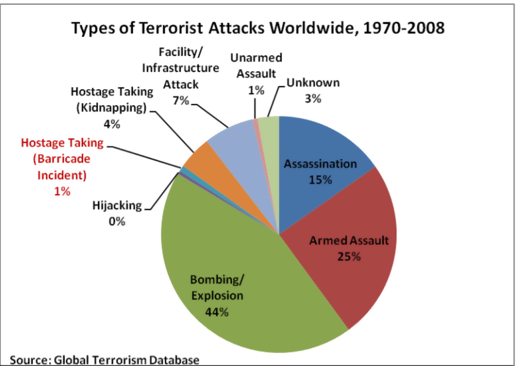 Why it is important to combat terrorism financing

Experts believe that interfering in and disrupting the financial-transaction flows of terrorists is an effective way to support the Global War on Terrorism. Disrupting terrorism financing not only denies terrorists precious resources but also provides information on terrorist activities. Banks and national economies have a motive to deny terrorism financing to ensure national security and avoid diplomatic fiascos.

Furthermore, terrorism-related activities are geographically concentrated, which gives finance-based anti-terrorism activities a lot of potency. Figure 2 below represents the number of fatalities from terrorists’ regional attacks over a span of 47 years. Keen observers will notice that in 2016, 75 percent of the terrorism-related fatalities occurred in the Middle East and Africa regions. 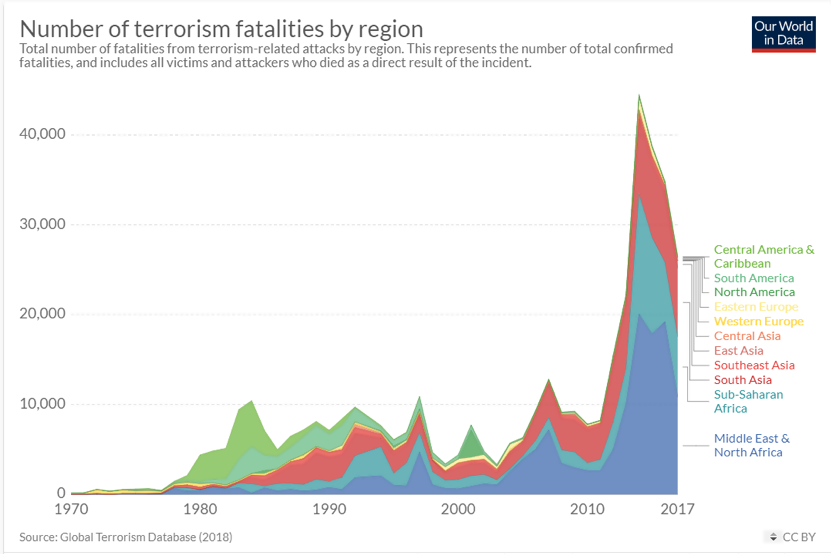 Now that the importance of such efforts has been underlined, delineating the sources of such funds becomes a natural extension.

Overall, funding activities can be divided into three major categories:

Charities basically comprise donations from charitable organizations and wealthy individuals. Donations are considered to be one of the major sources of funds for terrorism and related activities, especially since the start of the War on Terror. Terrorism-financing-related charities are both international and national in nature. National charities fill the gaps left by government funding to provide basic services. This allows terrorist organizations to gain valuable social capital that is often turned into political power in the long-run. International charities often exploit the humanitarian crises that are created due to civil wars. This funding is then diverted towards blameful activities.

Illegal activities also play a pivotal role in raising terrorist funds. According to researchers, illegal activities vary from low-scale criminal activities to organized crime. Humans, drugs and weapons trafficking are the most common illegal activities used to raise funds. In addition, many terrorists also adopt illegal commerce practices, such as selling counterfeit products. For example, the terrorist group behind the 1993 bombings of the World Trade Center raised funds by selling counterfeit T-shirts on New York City’s Broadway. Similarly, the terrorists behind the 2004 Madrid train bombings sold counterfeit compact discs and smuggled drugs in order to generate money for their activities. According to past research, revolutionaries of the Irish Republican Army (IRA) and the FARC (Revolutionary Armed Forces of Colombia) have also generated revenue via trafficking cocaine.

There are general and specific gaps in efforts to combat terrorism financing. Generally, terrorist groups’ awareness of anti-terrorism-finance (ATF) efforts gives them a head start. Specifically, terrorists are heavily dependent on illegal activities such as smuggling, drug trafficking and counterfeiting to generate revenues. These activities are difficult to track through legal financial systems.

Furthermore, increased reliance on cash makes tracing funds more difficult. According to experts, the funding of al-Qaeda, an organization based in Iraq, is made through couriers carrying huge amounts of cash. Similarly, the 2005 attacks in London were also funded solely by cash. Another key insight from the London attacks is that terrorists now use local, domestic resources to plan, execute and fund the terrorist activities. The bombings were planned by British citizens who raised money locally to support their activities. Terrorists’ use of cash and local transfers makes it harder to trace suspicious activity.

Lastly, it has been found that ATF efforts are only as good as the least-aware members of society. During discussions with representatives from Syrian non-governmental organizations (NGOs) in Turkey and Jordan, it was observed that basic understanding of due diligence was often lacking among local aid workers in the early stages of the crises.

With globalization, terrorism became an international problem, and as such, the response has become centralized and international as well. After 9/11, the United Nations Security Council proposed various steps to avoid repeating mistakes of the past. As a result, the FATF (Financial Action Task Force) added terrorist funding to its list of targets. Such efforts made countries liable for a number of ATF efforts. These included passing legislation stating that terrorism financing is illegal and making it mandatory for financial institutions to report suspicious transactions, cooperate with UN bodies to track the terrorist financers and ratify the UN convention on financing terrorism. Awareness for local governments also forms an important part of ATF efforts. Most importantly, international efforts ensure standardization of ATF efforts, which stops terrorists from finding loopholes in the global ATF shield.

All of these efforts are backed by the threat of being placed on the FATF blacklist. Countries that don’t fulfill their responsibilities in global ATF efforts can see themselves being placed under sanctions by the international community.

Role of central banks within these international efforts

Central banks (CBs) form the front guard of international finance. The Central Bank of Ireland provides a good example of central banks’ ATF efforts. Ireland has implemented the Criminal Justice Act against money laundering and terrorism financing. According to the Act, both financial and credit institutions are obliged to take measures to stop terrorist funding. These include carrying out customer due diligence, constant tracking and monitoring, immediate reporting of suspicious transactions, and training and awareness activities regarding policies and risks associated with terrorist financing. Other countries struggling through the issue can use such examples as benchmarks.

In some ways, CBs are at a disadvantage when combating terrorism. Traditional CB detection efforts have been geared towards AML (anti-money laundering) and not ATF roles. AML-fund detection focuses on the detection of the sources of funds. Meanwhile, ATF efforts focus on the intended uses of funds. This distinction is made because terrorism activities are often funded using legitimate businesses. The workloads of central banks are expected to see further rises in the long-run because of emerging threats.

Cryptocurrencies such as bitcoin operate outside of the control of virtual currencies. Strong  evidence of the use of bitcoin in terrorist attacks in Indonesia and Europe has been found. Terrorist organizations are on the constant lookout for the development of such virtual currencies (VCs) in order to mitigate the risks associated with traditional methods of funds transfer. A few websites of terrorist organizations have started fund collection using bitcoin. Furthermore, many bitcoin automated teller machines (ATMs) and bitcoin exchanges are located in the countries with high threats of terror attacks. Therefore, there is a high risk that VCs will be employed for the financing of terrorism, as they allow the seamless, anonymous transfer of funds from one location to another.

Development of quantum computers can help break down the encryption surrounding cryptocurrency transfers. That, in turn, can help future governments in the detection and tracing of such funds. The United States’ National Security Agency (NSA) is already cataloging such transactions, with the hope that they can be decrypted in the future through the use of quantum computers.

Terrorism financing is a serious risk for both national and private banking systems. This risk is being mitigated via international efforts. These international efforts need to be improved in order to address current gaps as well as future threats. Through such deliberate efforts, it is hoped that one day, terrorist activities can be minimized on a global scale.

Housing Costs: How They Undermine Western Prosperity and How to Fix the Problem

Finance and a Green World: The Role That Finance Plays in Making the World More Green