Recently, Iran has been experiencing increased tensions with the United States and its allies over the rollback of the Iran nuclear deal. These hostilities will affect decision-making matrices for all of the important players in the world of finance and banking. The specific impact of these simmering tensions depends on the further evolution of the current tensions. However, before one can get into the details of the current tensions, it is important to understand their origins.

The Iran vs. US affair

Iran and the US have been at odds with each other since the bloody Iranian Revolution of 1979. These tensions were expected to be eased under the Joint Comprehensive Plan of Action (JCPOA) deal, in which Iran was promised greater access to international markets in return for scaling back its nuclear program. However, President Donald Trump pulled the US out of the deal after coming into office. This led to an escalation of tensions that were initially betrayed through proxy moves, such as the Yemeni Civil War and Syrian Civil War. Recently, the hostility has escalated to damaging oil containers. With such eerie parallels to the Vietnam War, it has become imperative to analyze the potential fallout from a more serious conflict.

Implications of this war

The implications of tensions in the Persian Gulf depend on the nature of the acrimony between Iran and the US. The two countries may either limit their hostility to regional maneuvering and posturing or push it into a full-blown war. Even if the two sides avoid war, these tensions will still have implications all over the global political and economic landscape.

For starters, a cold war will make any solution to the Syrian conflict highly unlikely. This is because Iran has become a serious player in the Syrian Civil War by supplying embattled President Bashar al-Assad with much-needed manpower and technical support. This gives Iran tremendous power over the terms of peace in post-war Syria. A delayed peace agreement in Syria will further delay gas-pipeline supply to Europe. This essentially means that Russia will remain a major player in providing gas supplies to Europe. Therefore, the conflict will inadvertently help the Russian position in Europe.

Similarly, tensions between the US and Iran would also affect US-China animosities. This effect could work its way through North Korea. This is because another Gulf crisis will embolden North Korea; Persian Gulf tensions will divert valuable military resources away from the Korean Peninsula. Such new-found confidence will play an important role in Korea’s negotiations regarding its nuclear weapons. If these negotiations are drawn out, due to a more belligerent North Korean posture, this could translate into higher risk values for finance assessors in South Korea and Japan. (The US has military bases in Japan and South Korea that could become the first casualties of potential missile strikes by North Korea against US interests.)

Lastly, these tensions will benefit Turkey in its role as a regional hegemon. This is because increased conflict with Iran translates into increased reliance by all players on using Turkey as a counterweight in different arenas. Iran will need Turkey in its efforts against Saudi Arabia and Israel. While the US will need Turkey on its side in order to ensure that the former Ottomans aren’t swayed by Russian invitations. In all of these situations, Turkey will be the winner as it will increasingly find itself in a position to demand more from its allies.

All of the above implications hold true only if tensions don’t go over the tipping point into a destructive regional war. This regional war would likely involve Saudi Arabia, Iran and the United States at the least and has the possibility of turning into a more major war that might also pull Israel, Yemen, Egypt, Qatar, Bahrain and other allied countries into the fray. Such a disastrous war would affect the decisions of financiers and economic decision-makers all over the world.

The biggest fallout from this conflict would be on oil prices and resultant global inflation. To understand the effect of war on oil prices, it is important to understand the different ways that such a war would disrupt the supply of oil. The oil supply would be disrupted in the Strait of Hormuz, the Saudi Aramco Abqaiq refining facility and pipelines that transport oil from Saudi Arabia’s western shores to its eastern ones. The following map will demonstrate the importance of these points. 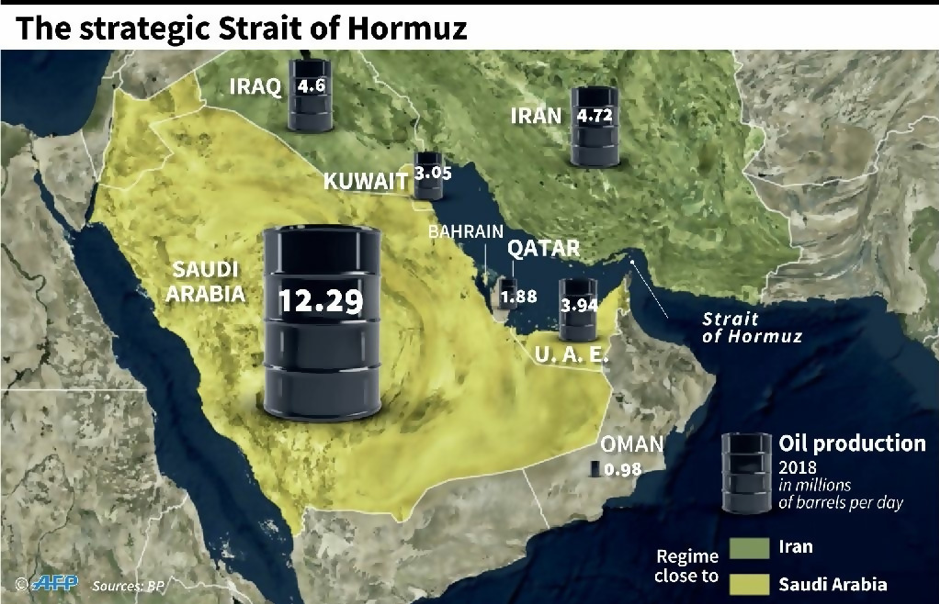 From this map, the first fact to note is the share of oil production in this small region. Global oil production in 2018 was 75.78 million barrels per day. By that account, this region produced around 36 percent of the global oil supply. Disruption of this supply could lead to the oil price rising to $250 per barrel from its current double-digit level.

This increase would occur via three supply disruptions. First, a war would block the Strait of Hormuz to all oil shipments. Currently, the Strait hosts shipments of more than 18 million barrels of oil per day. All of that oil would stop reaching global supply chains. Second, even if the Strait was open for transport, it would become very hard to ship oil because Iran is expected to bomb the Abqaiq oil-refining facility located in the Eastern Province of Saudi Arabia. The facility can refine more than seven million barrels of oil per day, and any disruptions would dramatically affect Saudi oil-production capacity. Third, Saudi Arabia has built a pipeline to transport oil from its western shore to its eastern shore in case the Strait of Hormuz becomes inaccessible. Unfortunately, war in Yemen might render that pipeline unavailable even if the oil could be transported. As the map clearly shows, any oil shipments leaving the Red Sea would be under the range of missiles from the Islamic militant Houthi rebels on the Yemeni coast. 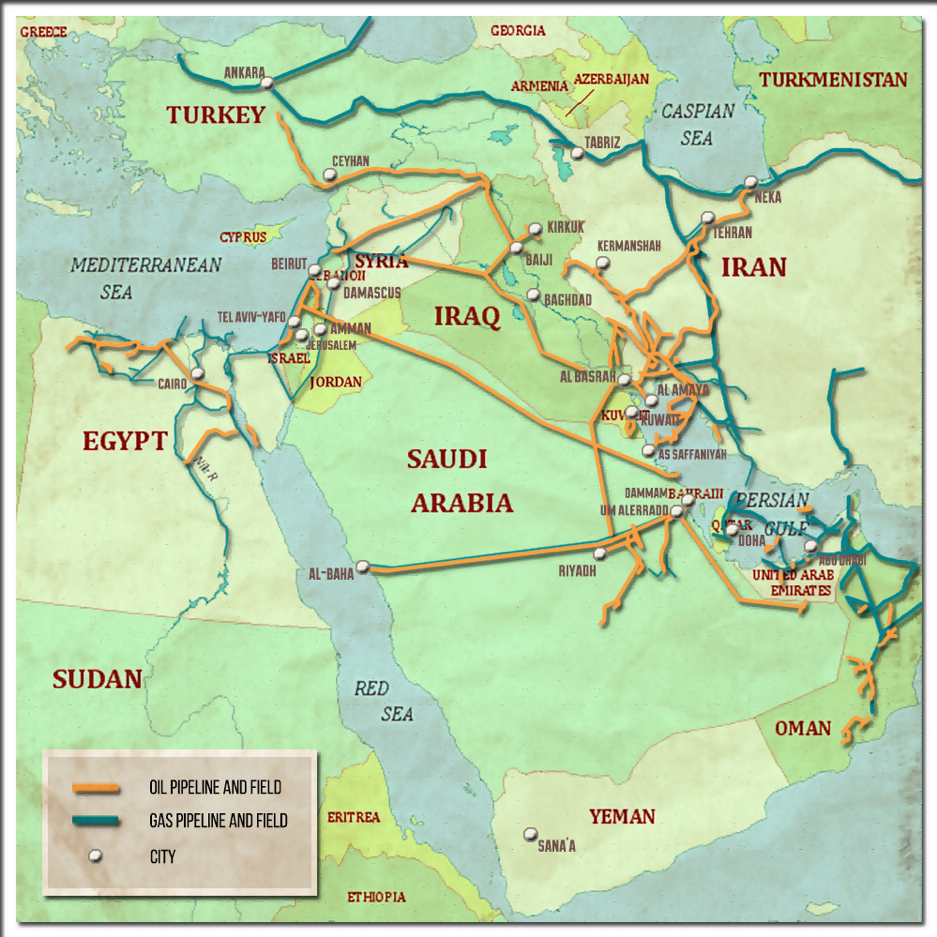 Furthermore, with increasing oil prices, many agents might be forced to shift towards liquefied natural gas (LNG). However, LNG may also become collateral damage in a war for regional dominance. Last year, Qatar supplied around 30 percent of the global LNG supply. War in the Middle East would limit Qatar’s ability to ship LNG via seaways. In addition, the war would also reduce investor confidence in the expansion of LNG production capacity in Qatar. Such a supply drop could see world LNG production elsewhere increase by a large margin.

Both these increases would have two knock-on effects. First, increasing supply-push inflation could see central banks increase interest rates in the hopes of curtailing inflation. This interest-rate increase would dampen global investment for the considerable future. Furthermore, the fall in investment could be the straw that breaks the camel’s back when it comes to the impending corporate-bond crisis. According to the Bank for International Settlements (BIS), corporations need to pay back $4 trillion in corporate debt. This debt would be very hard to restructure in an increased-interest-rate environment.

The United States and Iran have been at odds since the inception of modern Iran as an Islamic republic. However, never before have these conflicts been so direct with such dire potential consequences. A direct conflict between the two nations would have disastrous consequences for the global economy via its impact on the price of oil. An oil-price crisis could also trigger secondary crises, such as activating the corporate-debt crisis.