Top Posts
International Women’s Day – An Industry Reflection
Consumer Privacy; Corporate Responsibility?
Why 2020 Could Be a Turning Point for...
Why are UK Landlords Leaving the Rental Market?
Hong Kong-China Unrest and the Implications for China’s...
Tactics for Keeping your Top Team Happy
Home Editor's Pick Exporting Water for Dollars: Reorientation in a Dry World
Finance

Exporting Water for Dollars: Reorientation in a Dry World

My water for your dollars

The developing world is running low on water and high on guns, with a constant need for generating foreign currency. Without preemptive action, these three elements might react to create destructive outcomes. Water-based products, namely agricultural, have been important to developing-world economies. The following discussion will focus on the use of water to earn foreign exchange in light of changing climatic conditions. Developing countries need foreign exchange to pay for imports and repay debts. Agricultural products act as a good earnings source for that foreign exchange.

Figure 1: Food exports as a percentage of merchandise exports for low- and middle-income countries for given years. 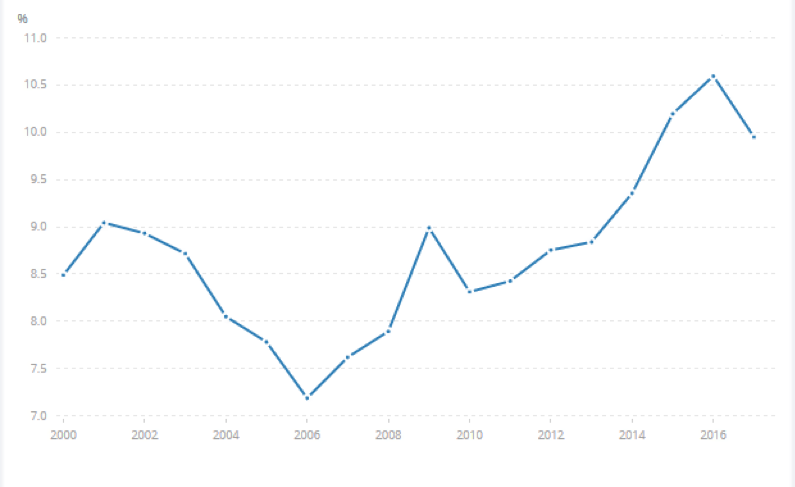 According to Figure 1 above, food exports have become increasingly important as sources of foreign exchange. Their role as foreign-exchange-earning sources is reinforced by a number of other factors. The following figure shows the global rankings of the percentages of national labor forces employed in the agricultural sector.

As the above figure clearly shows, agriculture is an important job-generator. Apart from being a bread-earner for poor countries, agriculture also gains support from being a voter bank. Furthermore, many farmers rise up to become senior politicians and/or to form interest groups of their own. All of these dollars come at a hefty water cost.

The agriculture sector takes in water and churns out products that can be exported. These products are mainly categorized under food and livestock. The production processes of these products use astronomical amounts of water to produce the final goods. The United Kingdom’s Institution of Mechanical Engineers (IMechE) estimates that one kilo (2.2 pounds) of wheat uses between 500 to 4000 liters of water. The figures rise even more for livestock. According to the same measurement, it takes a whopping 5,000 to 20,000 liters of water to produce one kilo of beef. According to the following table, such large requirements for water remain consistent for other types of food as well. 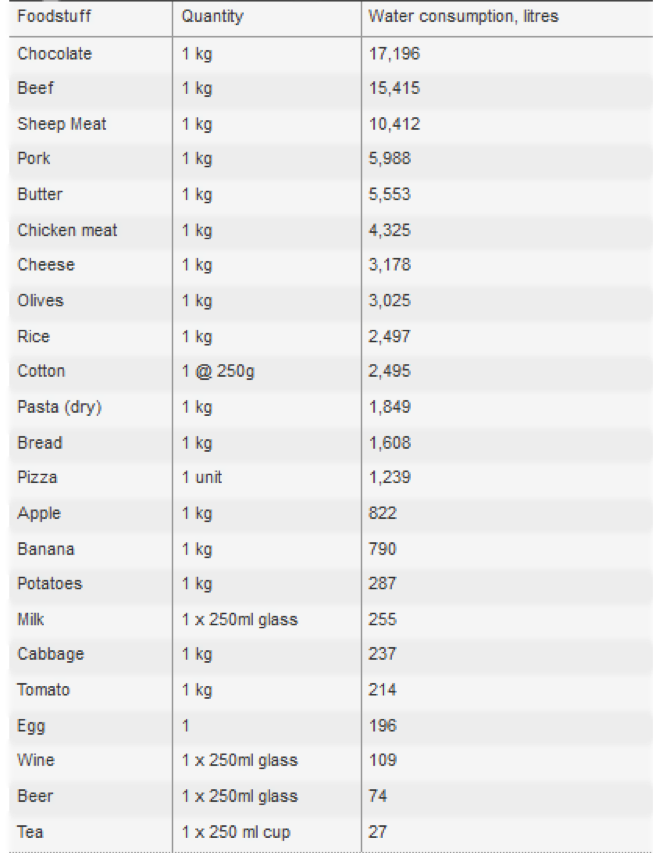 By this account, the global food-related water-intake demand could increase threefold to reach 10 to 13.5 trillion cubic meters per year. This is especially bad news, considering that every person born in the future will have lower water availability.

Now, all of this consumption is sustainable if the global availability of water per person remains the same. However, future water-per-capita availability (WPCA) will decrease because of the three horsemen of climate change, which include population growth and income growth in developing countries. 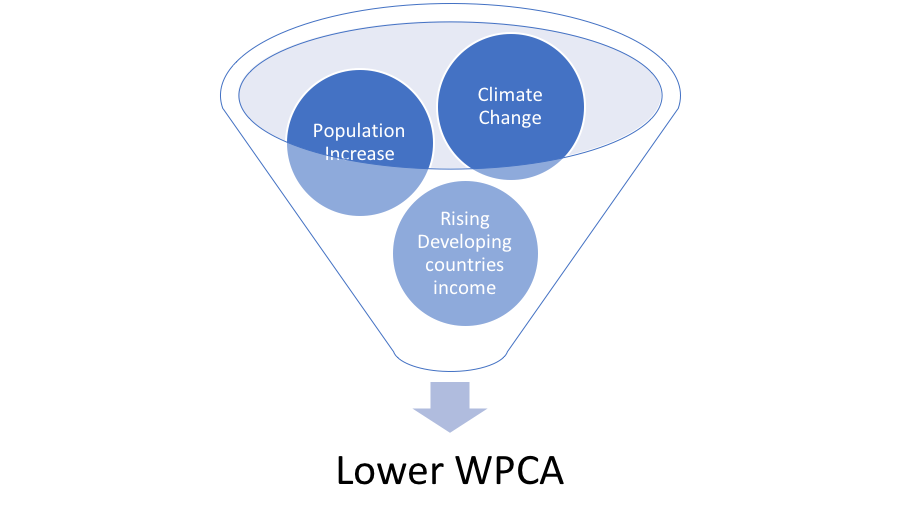 The effect of climate change on water availability deserves a much deeper explanation. Professor Dr. Dieter Gerten in his research paper “Global Water Availability and Requirements for Future Food Production”used 17 different General Circulation Models (GCMs) to predict the change in water availability throughout the world. He found that many nations in North Africa, East Africa and South Western Asia were water-scarce. Being water-scarce meant that these nations did not have enough water to produce 3,000 kilo calories/day/person of food. Of course, the real situation will be much worse, since his paper assumed 80 percent of the calories to come from vegetation and 20 percent to come from meat sources. The following image shows the result of sensitivity analysis, which demonstrates the likelihood of a more than 10 percent reduction in green water and blue water (GWBW) availability after integrating population increases.

As the image clearly shows, developing countries will see their water reserves dwindle. These reserves will decrease because of four major factors. Precipitation is the first of these four reasons. Scientists at the Intergovernmental Panel on Climate Change (IPCC) have found that climate change disturbs precipitation cycles. This disturbance occurs due to anthropogenic factors. As air becomes warmer, its ability to carry more water increases. This creates a “precipitation whiplash” effect, through which extremely dry spells are followed by flood-inducing showers. Apart from precipitation changes, droughts will also become a more common feature for developing countries.

Stronger droughts will become another reason for reduced water availability. Although other factors are also culprits in causing droughts, climate change will further aggravate these factors. Increased temperatures, precipitation and water-transpiration rates strengthen other geographical factors that initially cause droughts. Furthermore, climate change will also increase water-related extreme-loss events such as floods. These events will damage infrastructure, such as dams and barrages, which are used to ensure reliable water supplies for agricultural production. According to the National Centers for Environmental Information (NCEI), extreme water events in the United States alone have caused billions of dollars in damages since 1980. Their breakdown is as follows.

Apart from all of the structural damage, climate change will also damage natural stores of water. Mountain glaciers provide 50 percent of the global fresh-water supply. Currently, due to climate change, many of these “water towers” are decreasing in size. Such a decrease means that more than 50 percent of the global fresh-water supply is under threat. This decrease is due to two causes. First, the increase in temperatures, along with the presence of greenhouse gases, accelerates snow melting. Then hotter climate causes “snow droughts” that reduce the formation of ice. Both these factors will reduce overall glacier-based fresh-water availability. This could become a serious concern for especially South Asian countries, which rely on fresh-water supplies for crop plantation.

South Asian countries might need to look at Syria to get a sense of what is to come. Syria’s civil war has displaced and killed more than a million people over the last seven years. It is one of the most recent examples of how societies break down because of water shortages. Before the civil war began, Syria was experiencing one of its worst droughts, which started in 2006. This forced agriculture to fall from 25 percent of gross domestic product (GDP) in 2003 to 17 percent of GDP in 2007. Such a decrease prompted large urban migration. However, the migrants could not find jobs, and the resulting civil unrest led to an atmosphere that was ripe for a revolution.

This would have been more acceptable had the climatic conditions in Syria been local. However, the drought from 2006 affected all of the Fertile Crescent, which included Lebanon and Jordan. Yet, it was Syria that saw a civil war. This was due to the country’s policy of using food as an export. Before the war, Syria was one of the biggest regional exporters of food. When food was used as an export, this meant that more water was used than the country could afford to use. With export-level food production, ground-water supplies became vulnerable to drought. The ensuing urban migration created political unrest, which culminated in the Syrian Civil War. Such mismanagement of water resources can lead to similar consequences for other countries. With climate change, the margins of error will only decrease for governments of the future.

Just because it is becoming ever harder to produce agricultural goods does not mean that the need to earn foreign-currency reserves is going to decrease any time soon. Therefore, successful governments need to find a way to earn foreign exchange while reducing or maintaining water intake. Doing this will entail a combination of minimizing water needed per kilo of agricultural produce and maximizing the amount of foreign exchange earned per kilo of agriculture produce.

Currently, a number of measures are being tried around the world to reduce the water usage per unit of agriculture produce. Drip irrigation is one of the most useful technologies to reduce water usage in crop production. Apart from reducing water usage, drip irrigation also increases crop yield. Currently, many governments throughout the world are subsidizing drip irrigation, with Pakistan being one such example. Apart from drip irrigation, use of high-yield seeds, vertical farming, robo-farming and land reform provide good avenues of reducing water usage. Once these agricultural products are produced using the least amount of water, nations will still need to maximize foreign-exchange earnings.

The best way to maximize foreign-exchange earnings is via value addition. Value addition in agricultural production is best summarized by the United States Department of Agriculture’s (USDA’s) definition. According to the USDA, value addition includes changes in the physical state or form of the product, augmenting business plans and physical segregation that enhances value. Each of these types of value addition can be demonstrated via examples. Converting fruits into jams is a good example of product changing. Similarly, focusing on organically produced goods comes under changes to business plans. Meanwhile, the identity-preserved marketing system is a good demonstration of physical segregation-based value addition. Using the right combinations of value addition and water saving can help countries maintain favorable current-account balances while at the same time ensuring requisite water supplies for future generations.

Agricultural exports play an important role in ensuring current-account surpluses. However, countries have to keep in mind the water-reducing effects of climate change. Recent research has demonstrated that the world of tomorrow will have to work with less water. This decrease in water availability will come as a result of four major forces. They include changes in precipitation, compounding of drought-based conditions, reduction in glacial storage of water and infrastructure-damaging extreme water events. Such events have already been the source of civil war in Syria. This civil war had its roots in the inability of the Syrian regime to foresee a drier climate. A similar fate can be avoided by nations if they practice water conservation and value addition in agricultural production.

Reviewing the Current State of the UK Lending Market