The ECB works through three governing bodies: the Governing Council, Executive Board and the General Council. The goal of the Governing Council is to help in the development of economic and monetary policies and to set the interest rates at which commercial banks can borrow from the ECB. The primary objective of the Executive Board is to implement the monetary policies and maintain the daily operations of the ECB, whereas the General Council contributes to the advisory and coordination work for future projects.

The Statute of the ECB guides the aims and functions of the ECB. According to Article 2 of the Statute, the first and foremost goal of the ECB is to maintain price stability throughout the eurozone. Furthermore, as per Article 3, the primary tasks of the ECB are to devise and control the monetary policy of the eurozone, to maintain the foreign reserves of the European System of Central Banks (ESCB), to perform foreign-exchange operations, and to take care of the operations and securities of the financial-markets infrastructure under Target2 payments systems. Also, the ECB has the right to authorize the issuance of euro banknotes. However, member states have the privilege to issue the euro coin, but the ECB must be informed before any such activity.

The European Central Bank versus a national central bank

However, for all of their similarities, there are also minor differences between the ECB and NCBs. NCBs tend to use the produce-money-and-purchase (PMAP) approach. Using the PMAP approach, the central bank produces money and uses it to buy government bonds from the banking system. In return for these bonds, the NCB creates money on the account that the selling bank holds at the NCB. In comparison, the ECB tends to use the produce-money-and-lend approach (PMAL). Here, rather than direct lending to the government, the ECB produces the money and lends it to the respective NCBs. The lending period varies between a week to three months. The preferred collateral for these loans to banks is government bonds. Under both above-mentioned approaches, the respective central banks receive new base money and hold additional reserves on account. The additional reserves help in expanding the credit base and creating more money. Therefore, the major difference between the ECB and an NCB is that during a period of crisis, the NCB buys government treasury bonds while the ECB lends money to commercial banks and governments in the EU.

Governments usually spend more than they receive in taxes. For this purpose, they run a deficit. Governments pay for these deficits using treasury bonds. A huge portion of these treasuries is bought in open-market operations. However, a portion of the central bank’s profit is remitted back to the government by the end of the fiscal year. Furthermore, it should be noted that in order to pay the principal on the bond to its holders, the government issues a new bond to pay for the maturing one. Thus, the debt is continually monetized rather than being paid. Figure 1 below represents the process mentioned above of how the NCB finances the government. 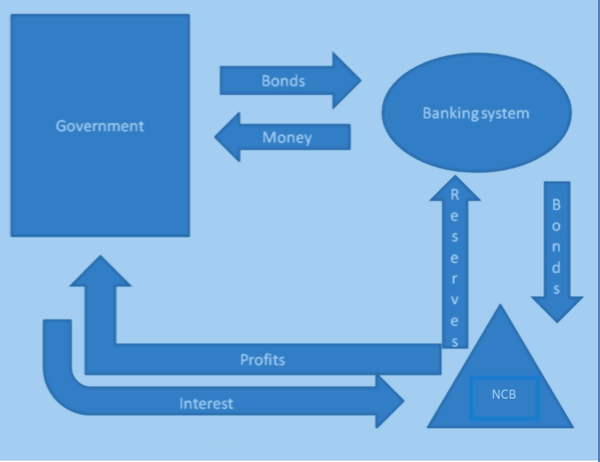 On the other hand, the ECB finances its deficit differently. The ECB lends to banks against the collateral. By guaranteeing the bonds as collateral at the ECB, banks receive new reserves and can expand credit. Governments pay interest to the banks since the banks still own the government bonds. In return, banks also pay interest for securing the loans from the ECB. Thus the ECB remits its profits back to governments. Figure 2 below represents how the ECB finances eurozone governments. 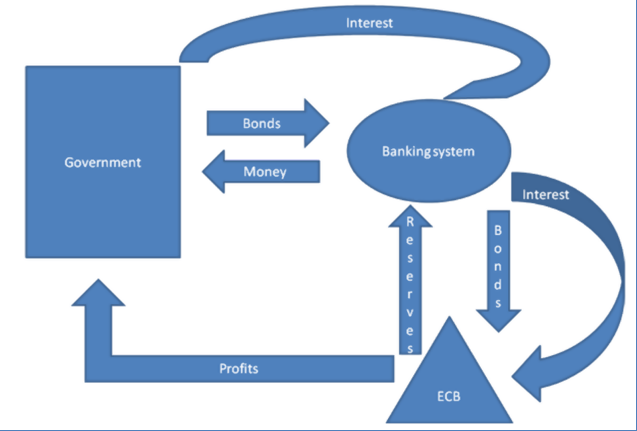 Apart from differences in the monetization of debt, the ECB and an NCB also react differently to economic crises. Usually, the NCB’s primary response under a crisis is to increase the liquidity in the market through the massive purchase of assets. Also known as quantitative easing (QE), the purpose of these purchases is to increase the cash in the market (around 25 percent of the country’s gross domestic product, or GDP). However, the national central bank can reduce purchases back to the usual rate once the crisis is over and economic performance is strengthened.

On the other hand, the ECB’s major concern during the crisis is to ensure liquidity as well as to repair the lending system to commercial banks. The ECB changes its regular monetary policy by increasing the maturity of bank loans. There have been a series of events in the past in which the ECB has eased the requirements on collateral to give commercial banks easier access to the ECB’s reserve money. For example, in 2010, the ECB introduced the Securities Markets Program (SMP) and also bought Greek bonds to help Greece in overcoming its financial crisis.

There also exists a clear difference between the ECB’s and an NCB’s transparency in the mechanism of increasing the money supply. The national central bank of its respective country is more transparent in its operations compared to the European Central Bank. The NCB buys government bonds outright, while the ECB accepts them as collateral for new loans to the banking system. The economic effects of both cases are the same since they eventually help to increase the money supply. In the case of an NCB, the money supply will increase until the NCB sells the bonds. In the case of the ECB, the money supply will tend to increase when the ECB renews its loans. However, there are legal differences in both cases. An NCB includes its government bonds in the balance sheet, whereas the ECB does not, because bonds remain within the legal ownership of the banks. Since the ECB does not publicly declare the collateral provided for its loans, one cannot be sure, for example, of how many Greek government bonds have been provided as collateral.

In both cases, the government’s debts are equally and effectively monetized. Let’s again consider the Greek example here. When the ECB bailed out Greece (2010), it did not purchase the Greek bonds outright as the NCB would have. Instead, it simply accepted them as collateral. If the ECB had not done this, the government of Greece would have defaulted much earlier. Also, there is another monetization process going on side by side. Market participants are well aware of the phenomenon that central banks purchase government bonds by accepting them as collateral. Banks buy the bonds due to their privileged treatment, ensuring a liquid market and pushing down yields.

The ECB and an NCB also differ in their mandates. The ECB’s only mandate is to achieve price stability, whereas NCBs aim to achieve price stability as well as increase employment levels in their respective countries. The European Union promotes economic and social progress along with high levels of employment, but the ECB accomplishes this through price stability only. To achieve price stability, the ECB influences conditions in the money market and levels of short-term interest rates. Furthermore, the ECB follows the strategy that a systematic and consistent approach must be applied to all monetary-policy decisions. Consistency helps to stabilize inflation expectations and enhance the credibility of the ECB. For this purpose, the Governing Council of the ECB has clearly stated the definition of price stability in its policy papers. Here it is referred to as a year-on-year increment in the HCIP (Harmonised Index of Consumer Prices) for the euro area that is below 2 percent. This shows that monetary policy should be forward-looking, as price stability must be maintained over the medium-term.

Future concerns for the ECB

With the emergence of a regional bank, new challenges need to be addressed in order to ensure the smooth functioning of the regional bank in the long-run. First is the redenomination risk—fears related to the sustainability of the sovereign debts of a few eurozone members have resulted in a widening of the sovereign spread, and certain countries might revert back to their national currencies by leaving the eurozone. Therefore, the ECB must also mitigate such risks by catering to their interests. In addition, the wealth effect of consumption is varied for different countries, and the ECB will have to make choices to satisfy different countries. Amendments and changes to monetary-policy decisions will also be a major concern for the ECB since regional banks are formed through treaties, and changes will require unanimous agreement between different countries.

Moreover, policy-making is also becoming more complex since changes are required within regional business cycles rather than local ones. Currently, there is a lack of focus on employment maximization and increased focus on price and inflation maximization. Therefore, employment levels must also be considered to retain support from countries with high unemployment.

Quite a few differences exist when comparing the monetary policies and implications of an NCB with those of the ECB. However, it should be noted that both are working to achieve balance in the money supply through various channels. The main purpose of the ECB and the NCB is to manage the stability of the currency by controlling inflation through the supply of money in circulation. They play a crucial role in controlling inflation and enhancing the growth in the region. However, certain concerns should be addressed for future economic and social growth.

Finance and a Green World: The Role That Finance Plays in Making the World More Green