Top Posts
International Women’s Day – An Industry Reflection
Consumer Privacy; Corporate Responsibility?
Why 2020 Could Be a Turning Point for...
Why are UK Landlords Leaving the Rental Market?
Hong Kong-China Unrest and the Implications for China’s...
Tactics for Keeping your Top Team Happy
Home Finance Coal Prices: China Is Leading the Game
Finance

Generally coal is considered to be widely spread across the globe. Reserves are present in all parts of the world and are assessed as being able to cover around 114 years of global production, according to the latest Statistical Review of World Energy from British Petroleum. However, even though the Asia-Pacific region holds the second-largest reserves, its consumption pushes up production and gives it the lowest reserves to production ratio of the world (53 years).

China has rapidly changed its policy over the last six months.

China recently changed its energy plan and has set different goals. It has decided:

China has decided to stop planned investments in the new construction of plants.

In its recent statistical report, the National Bureau of Statistics (BNS) of China wrote: “The industries of steel and coal have successfully fulfilled the task of cutting overcapacity in 2016, and the output of coal in 2016 dropped by 9.4 percent over last year.” Indeed, the output of coal in 2016 was 3.41 billion tons, and the share of coal in the energy mix is now at 62 percent (-2 points year on year), announced the BNS. Despite this decline, China remains the world’s largest coal consumer, coal remaining an indispensable fuel for its economy.

Xu Zhaoyuan, head of the research division at the industrial economy department of the Development Research Center of the State Council (DRC), said, “I don’t think coal consumption is going to rebound in the next several years, but will rather remain stable or decrease slowly.” 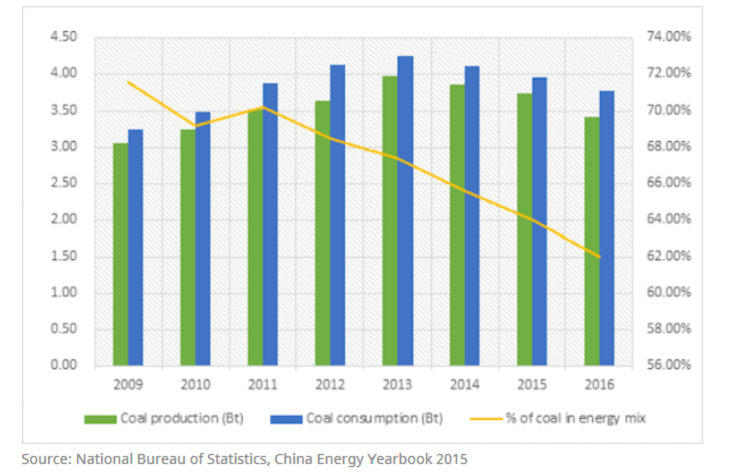 Rocketing prices have helped major producers, such as Anglo American and Glencore. They benefited from this trend, being able to decrease their debts, raising the profitability of their mines. At the end of 2016, Asian steelmakers rushed to buy shipments. Glencore announced recently that it would restart production at the Integra underground mine in New South Wales, Australia. A number of other mines in state and neighbouring Queensland also have plans to reopen.

2016 was an exceptional year for coal prices. It marked the end of a declining period, which started in 2011.

What is the trend for the future?

Over a longer period, the potential suppliers of coal in the world may accelerate their production, resulting in a new balance between supply and demand. It could mean the end of the price surge. But one noticeable fact is that all of China’s movements have disturbed somewhat the predictions of the experts: it is interesting to note, for example, that the predictions of the International Monetary Fund (IMF) for coal prices in 2017 and 2018 are different than those of the World Bank: the World Bank predicted a fall in prices for 2017 and a small increase in 2018, while the IMF forecast an increase in 2017 and a drop in 2018. Indeed, the spot hard coking coal prices have fallen again since the beginning of 2017 to around USD 150 per ton.

China, after having cut coal output during the last quarter of 2016 and being aware of the domestic consequences of a rise in prices, relaxed the mining days restrictions it had put in place earlier. Since this last decision, prices have dropped. A close look at each Chinese action in its coal industry will be needed to understand the evolution of its coal prices!

How To Get Return on Treasury Placements in 2017?

The Rise in Industrial Metal Prices Has Benefited Investors and Industry Giants: What’s Up for 2017?