Top Posts
International Women’s Day – An Industry Reflection
Consumer Privacy; Corporate Responsibility?
Why 2020 Could Be a Turning Point for...
Why are UK Landlords Leaving the Rental Market?
Hong Kong-China Unrest and the Implications for China’s...
Tactics for Keeping your Top Team Happy
Home Editor's Pick Climate Change: Causing Winds of Change in the Insurance Industry
Finance

Climate Change: Causing Winds of Change in the Insurance Industry

Climate change, the world andthe insurers in it

Climate change will bang on the doors of insurers, and, to adapt, the risk managers of the world are putting their houses in order. Climate change (CC) has very quickly transformed from a topic at research conferences into an adversity experienced by millions of people. CC is changing the world economically, politically and socially. In the short-term political horizon, hotter climates will exacerbate water scarcity, which can decrease political stability. In contrast, long-run political vision sees CC and security having a more direct relationship. Such political upheaval will be accompanied by economic downturn. The United States alone will see a 10-percent shrinkage in the economy if CC is allowed to continue on its current trajectory. Furthermore, CC can also be seen as a global injustice because the rich disproportionately benefit from it while the poor suffer because of it. Insurance is one of the most connected businesses in the world, and it will suffer withthe world that it protects. These sources of suffering are elaborated in the following sections.

The CC-related tribulations of the insurance industry can be summarized as changes inpatterns and risks. Figure 1 summarizes the various effects of climate change on the insurance industry. The changes in patterns will make historical risk calculations unreliable, while the changes in risks will cause second-and third-order effects. An insurance business works by charging premiums that will compensate for risk-adjusted expectations of undesirable events. The word expectation forces the insurer to make predictions about the bad event that is being insured against. That prediction is the basis for charging customers premiums. Before CC came into play, this was an easier job. Usually, climate-related changes were stable, and past data was a good measure of future values. Now, making these predictions is becoming ever more difficult.

These risk calculations are becoming more difficult to make for two reasons. First, the past pattern of climate may not be a good guide for future projections. This makes predicting risk a more inexact science. Second, while the literature does point towards the future of climate, it cannot give the exact ranges because of the complications of CC. The change in climate within the next few decades will overshadow the changes of the last 10,000 years. Calculating the second- and third-order effects in a changing world will prove to be an ever-evolving challenge. All of these calculations need to be correct in order to ensure accurate risk-portfolio calculations.

Figure 1: Reasons for change in the market 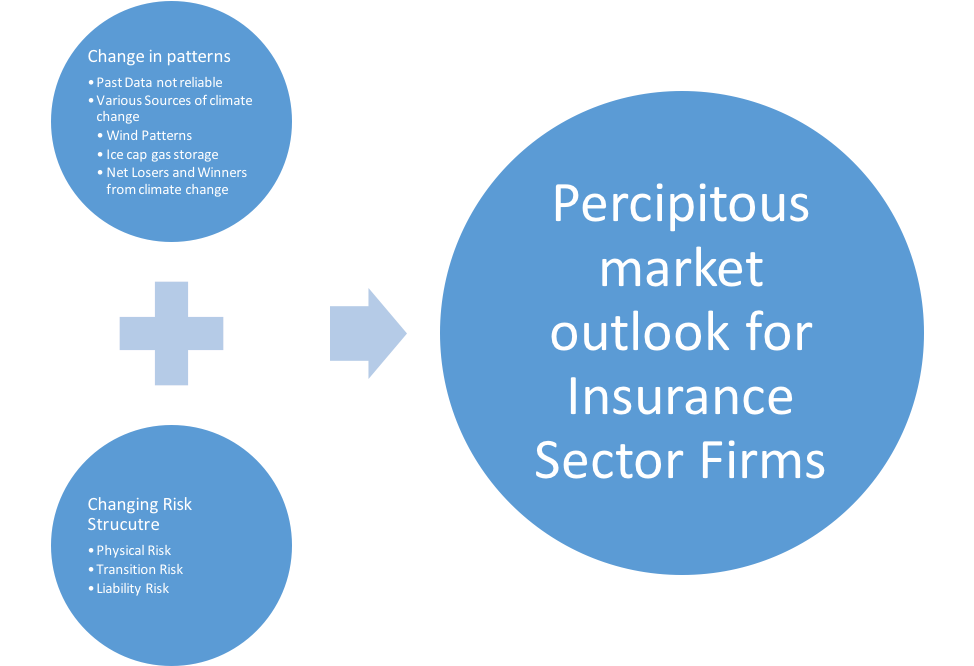 According to the Prudential Regulation Authority (PRA) of the Bank of England (BOE), CC will increase three major types of risks for insurers. They are physical-impact risk (PIR), liability risk (LR) and transition risk (TR). PIR includes increases in infrastructure spending due to CC. This spending might be a single spike, which is often event-driven such as reconstruction after floods, or constant, such as increased spending on health due to warmer temperatures. These physical-impact-risk costs are already mounting globally. The disaster damage for the US in 2017 alone stood at around $300 billion. While PIR is a first-order risk, TR is a second-order risk but one that is equally potent.

TR results from the fact that the world has to commit itself towards using non-carbon-based energy sources in order to mitigate global CC. This commitment can be global, such as the Paris Agreement, or national, such as Germany’s Climate Action Plan 2050 to reduce carbon emissions. Such transitions are not a source of risk when they are slow. However, due to their political nature, there is a fear that insurance-sector firms (ISFs) may see a fall in their asset portfolios because of a forced, quick transition. The forced closure of all 84 German coal-based power plants is an example of an unanticipated move that might have caught a few portfolio managers off-guard. Aside from political and physical effects, the legal effects will also translate into changing risks for ISFs. With CC, ISFs might see an increase in claims for liability insurance.

Getting sued for CC might have seemed like a distant concept in the past. Now, it has become a bitter reality for some ISF customers. General liability insures customers against lawsuit claims. Recently, the US state of Rhode Island sued polluters over CC. This will have ramifications throughout the whole of the United States. Due to the law of precedent, insurers will even feel the heat of lawsuits that are not related to their own customers. These lawsuits are bound to raise premiums and reduce profits within the general-liability submarket.

All of these changing risks work in a cycle. First, the PIR and TR will damage asset portfolios. This damage will cause financial risk (FR). That financial risk will transform into credit risk (CR), market risk (MR) and operational risk (OR). That, in turn, will increase the general risk that insurers have to manage. This cycle is summarized in the following figure.

This cycle will feed off itself unless ISFs take a number of actions in order to adapt to the new threat.

Adaptations to a riskier and uncertain world

Flexibility is always the answer to all change, and this canon applies to ISFs as well. ISFs can take a number of actions that will allow their balance sheets to weather the storms of CC. This evolution will involve all stakeholders in the insurance sector, including customers. The following discussion will analyze the proactive and reactive steps for increasing ISF resilience towards CC. The first of these steps involves repeating what already works.

If ISFs can force their customers to take precautionary measures against fires, they can do the same for CC. All insurers face the issue of moral hazard whereby the customer’s post-insurance behavior shifts due to the transfer of liability for risks. This problem is fixed bymaking insurance conditional on acceptable risk-avoiding behavior. Adriano Lanzilotto, the vice president of FM Global, recommends a similar approach for CC. With these adaptations, the customers can lean into CC by being proactive. The insurance industry is also taking a similar approach toTR.

The damage from TR can be counter-balanced by the gains from investing in green energy. Allianz has already invested more than $5 billion in green energy. Similar targets are being set by different players in the market, with the hope that these investments will act as a hedge against TR. Apart from backing green energy, stepping away from the carbon-based power sector might also be a good move.

ISFs have figured out that refusing to insure some carbon-based industries might be a profitable move. At first glance, refusal to serve an established client based on future concerns might seem foolish. Some might even think of it as a public-relations stunt. However, such a refusal of service is based on cold calculations. ISFs have concluded that the speed and intensity of CC will determine the size of the risk in their portfolios. By stopping insuringthe bad actors in the battle against CC, ISFs hope to minimize overall risk exposure to their portfolios. Yet, the front end is not the only way to save the planet and ISF balance sheets.

Risk management involves investing the premiums of customers, and these premiums are substantial in size. ISFs hold more than $30 trillion in assets. It would not be an overstatement to say that ISFs are movers and shakers in the investment world. When such a mover decides to stop investing in polluting industries, this is bound to help the global fight against rising C02 levels and pollution. This move can be executed under the cover of ethical investing to avoid upsetting customers who have carbon-based businesses.

Dealing with CC is a risky affair for all players in the economy, especially ISFs, which manage risk for a living. CC can make life harder for ISFs by increasing risks and making it more difficult to calculate them. However, ISFs are adapting to the change by using a variety of strategies and tactics. These include preparing customers for the negative effects of CC, investing in green energy, refusing services and investment in polluting industries. Change loves adaptability, and ISFs will have to adapt if they want to survive climate change.

How to Communicate with Customers During and After an IT Outage?