Top Posts
International Women’s Day – An Industry Reflection
Consumer Privacy; Corporate Responsibility?
Why 2020 Could Be a Turning Point for...
Why are UK Landlords Leaving the Rental Market?
Hong Kong-China Unrest and the Implications for China’s...
Tactics for Keeping your Top Team Happy
Home Finance American Wealth Boosted by Markets in 2016
Finance

American Wealth Boosted by Markets in 2016

The US Federal Reserve recently issued its fourth quarter 2016 “Statistical Release” on the financial accounts of the United States. According to the latest figures, American household net worth, calculated as the difference between total assets and liabilities of the household (and non-profit organizations sector), increased from $83.8 trillion in 2014 and $87.3 trillion in 2015 to $92.8 trillion in 2016. The increase accelerated constantly from quarter to quarter in 2016, and the fourth quarter increase alone represented almost 40 percent of the entire 2016 increase. To obtain this figure, the Fed summed up the cash, cars, real estate and stock-market assets held by all Americans and deducted their debts. The total assets have thus increased by two-thirds since the financial crisis of 2008, during which it fell to $56,000 billion.

A large part of the increase of household wealth came from booming markets at the end of 2016. 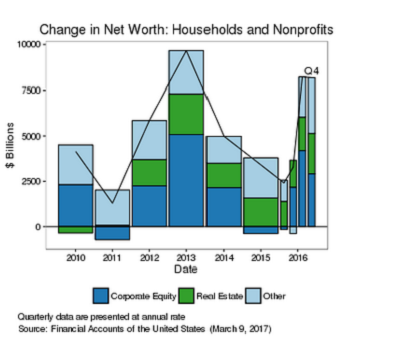 The increase in stock indices in 2016 contributed to this situation. And as far as the fourth quarter of 2016 is concerned, Wall Street grew by 8 percent between November 8, the date of the election of President Donald Trump, and December 31. Household debt increased at an annual rate of 3.8 percent in the fourth quarter of 2016. Consumer credit grew by 6.2 percent, while mortgage debt (excluding charge-offs) grew by 3.1 percent at an annual rate.

Good news for wealth management, but not for all.

Confidence in markets has increased, and Donald Trump did bring some hope for improvement in the US economy. However, wealth progression is not happening for everyone. When 80 percent of the stock market is held by the richest 10 percent, it is clear that the vast majority of Americans do not benefit directly from this enrichment. As the annual study by the Gallup Institute shows, 80 percent of households earning more than $75,000 per year own shares; but under $30,000 the rate decreases to 23 percent.

And looking at studies on average revenue, the curves are not showing the same optimism. According to the work of Emmanuel Saez and Gabriel Zucman of the University of California, Berkeley, the richest 1 percent in the United States held in 2012 (latest available statistics) 42 percent of the country’s wealth. The illustration of the widening of inequalities—the gap between household wealth and average income—has never been greater. The first is now 6.5 times higher than the second, a level higher than that reached at the peak of the 2007 housing bubble. While overall wealth has steadily increased, revenues have almost stood in the same spot.

Which explains why most of the fruits of the economic recovery were concentrated in a few hands. “From 1980 to 2014, average income per adult rose 61 percent in the United States,” claim economists Saez and Zucman along with Thomas Piketty. However, the average income before tax of the 50 percent who earned the least stagnated at around $16,000 per adult, after adjusting for the effects of inflation. On the other hand, incomes at the top of the pyramid have literally soared, rising by 121 percent for the richest 10 percent, by 205 percent for the richest 1 percent and by 636 percent for the richest 0.001 percent. Moreover, in 1980 an adult among the richest 1 percent earned 27 times more than an adult belonging to the least rich 50 percent. Today the ratio has increased to 81. “This ratio of 1 to 81 is similar to the gap between average income in the United States and average income in the poorest countries of the world, including the Democratic Republic of the Congo, the Central African Republic and Burundi,” the economists said.

Can we expect a better situation in 2017?

The government of the United States today obviously has the power to make economic growth in America more equitable again. Potentially pro-growth economic policies could lead to concrete solutions to mitigate inequality. Donald Trump’s willingness to sustain big investments in construction may help.

The United States definitely has good reason to be optimistic.

Digital Transformation Strategies Not Ready Yet