Top Posts
International Women’s Day – An Industry Reflection
Consumer Privacy; Corporate Responsibility?
Why 2020 Could Be a Turning Point for...
Why are UK Landlords Leaving the Rental Market?
Hong Kong-China Unrest and the Implications for China’s...
Tactics for Keeping your Top Team Happy
Home Commentary The Fourth Industrial Revolution and the Power Sector
CommentaryTechnology

The Fourth Industrial Revolution (FIR) will turn the power sector (PS) into a Blue Ocean Strategy market, and investors will have to adapt accordingly. (Blue Ocean Strategy focuses on capturing untapped demand through the creation of new products that make the competition irrelevant.) Historically, electricity has played a strategic role in the last three industrial revolutions. Electricity helped leverage the technology of steam turbines, which were created in the First Industrial Revolution (1R). That same electricity was used to power assembly lines in the Second Industrial Revolution (2R), while the Third Industrial Revolution (3R) completely depended on electric-powered communication devices and computers. Although it is true that electricity played an essential role in these revolutions, the relationship is more symbiotic than it seems. Each revolution has changed investment in the PS as well. At the start, the 1R promoted investment in alternating-current technology. Then, technological know-how of mass-produced warplanes from the 2R informed the design of gas-powered generation turbines. This technological understanding paved the way for investment in gas-powered electric generation. Today, the gas-powered sector has one of the highest efficiencies as compared to other thermal-powered production technologies. Similarly, today’s power exchanges cannot operate without 3R technology, such as computers and communication networks. The FIR will catalyze change in all of the subsectors of the PS, which includes generation, distribution and transmission.

Understanding change in these subsectors requires understanding the FIR. The FIR consists of a host of advances in big data, material sciences, internet of things (IoT) and biosciences. This breadth of innovation will be backed by speed that comes from the collaborative nature of the FIR, in which Sino-German collaboration is just one example. This speed and breadth will synergize biological, digital and physical assets towards economic-value creation. This synergy-induced value creation will affect all sectors, including the PS.

Effects of the FIR on PS investment

Overall, the FIR will change the focus and nature of judgment for investments in the PS by targeting each sub-sector individually. At first, the FIR will weaken the grip of large-scale generators on PS-generation market share by diverting the revenue and profit sources from big generators towards DERs. DER-based businesses will introduce servicification and horizontal expansion as yardsticks to gauge the success of PS-generation investments. Then the FIR-induced decentralization will affect investments in transmission. Within transmission, new sub-sectors such as utility-scale storage, dual-sided transmission and metering technologies will demand their “piece of meat” from investors. After changing the physical domain, the FIR will set its eyes on the PS intellectual investment. Soft investments will continue to grow in importance, and investors might have to alter their metrics to adjust to this new reality. The new situation also includes a future through which DER generators can shake utility-scale producers.

The FIR will reduce the share of utility-scale power production. This share will decrease because of the falling prices of DERs, which will make them economically feasible. As a result, investors in the transmission and distribution sectors of power will adjust their portfolios. Investors in power generation will have to realize that DERs combined with home batteries will reduce peak demand. This might be bad news for peak-load plants; however, overall asset utilization in power generation will increase due to falling redundancy. At the same time, service providers for DERs, such as Tesla, will become more profitable as they start to experience distribution economies of scale. According to Zion Market Research, the global DER market will reach $103.28 billion by 2023 with a CAGR (compound annual growth rate) of 10.3 percent. This growth will attract investment from primary and secondary financial markets. Therefore, power generation will see increased servicification by diverting investment away from peak-load generation plants towards DER service and equipment provision. Similar redirection of investment might also be seen in the transmission sector.

Northeast Group LLC predicted an investment requirement of $3.2 trillion within transmission and distribution for the period of 2016-26. However, the focus of investment will prioritize improving the adaptability of the transmission system to the FIR. Such an effort will entail the addition of features, adoption of new standards and implementation of new technologies. Investment in the distribution network will try to adapt itself to DER generation via introducing capabilities such as reverse metering and increased transmission capacity. Due to the FIR, investors may start to give more weight to dynamism and flexibility. However, the effects of digitization and de-centralization do not stop at investment into hard capital. 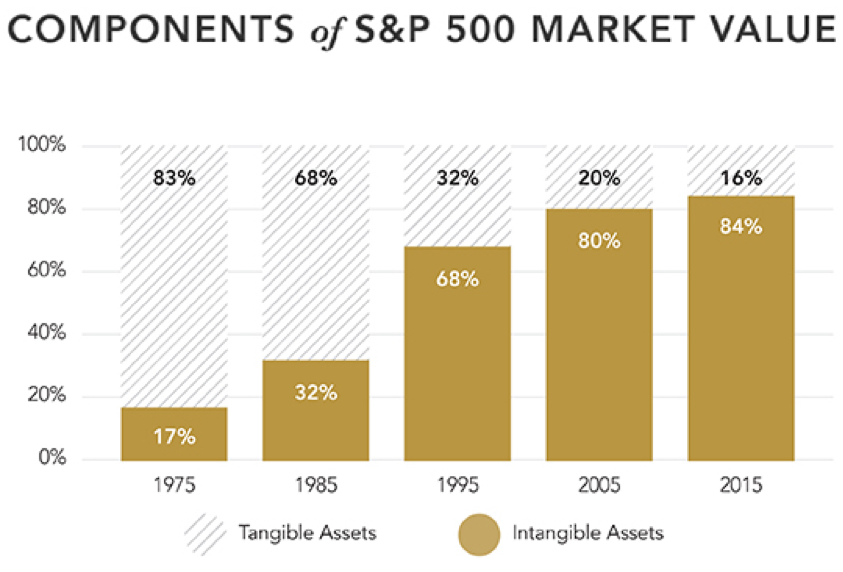 Soft capital will become an ever more important asset. Soft capital consists of intangibles such as intellectual property and data. The following chart from Ocean Tomo demonstrates the rise in value of intangible assets.

These intangible assets will realize their returns when digitization and artificial intelligence (AI) give companies exploitatively accurate predictive power. Such power will see behavior akin to a firm operating in Silicon Valley. Investors might have to tolerate continued losses in the hopes of harvesting network effects in the future. Of course, those losses on the balance sheet have to be taken with a pinch of salt. It can be argued that accounting standards are discriminatory in treating spending on soft capital as cost when it treats hard-capital spending as investment. Investors that see past this discrimination will be rewarded handsomely.

However, the future risk-adjusted return of such soft capital is conditional on the PS dealing with new challenges. One such example is the lack of insurance for soft assets. According to The Economist, insuring intangibles is a tricky business. While it remains tricky, investors will have to tolerate the unlimited risk potential of hazards such as a cyber-attack on a distributor’s data. Investors might also have to jump into the stormy waters of emerging markets because of their strong growth winds. India is expected to have the fastest global growth in PS investment in the 2020s.

When it comes to long-term investment in the PS, change is the only certainty. New technologies will bring electrification to new sectors. Due to electrification, investment in the PS will become a big cake. The International Energy Agency (IEA) claims that the world needs $48 trillion of investment during the 2014-35 period. The FIR, via digitization and decentralization, will determine the distribution of this cake.  However, the FIR will also bring uncertainty in investments for the PS, which might increase risk. To counter this uncertainty, investors might do well to heed the wisdom of Warren Buffett, investor and owner of Berkshire Hathaway. “Risk comes from not knowing what you are doing”. And knowing the FIR is a pre-requisite to knowing the worth of future power firms.