Top Posts
International Women’s Day – An Industry Reflection
Consumer Privacy; Corporate Responsibility?
Why 2020 Could Be a Turning Point for...
Why are UK Landlords Leaving the Rental Market?
Hong Kong-China Unrest and the Implications for China’s...
Tactics for Keeping your Top Team Happy
Home Commentary Rise of the Fallen: Reconstruction Options in War-Torn Countries
Commentary 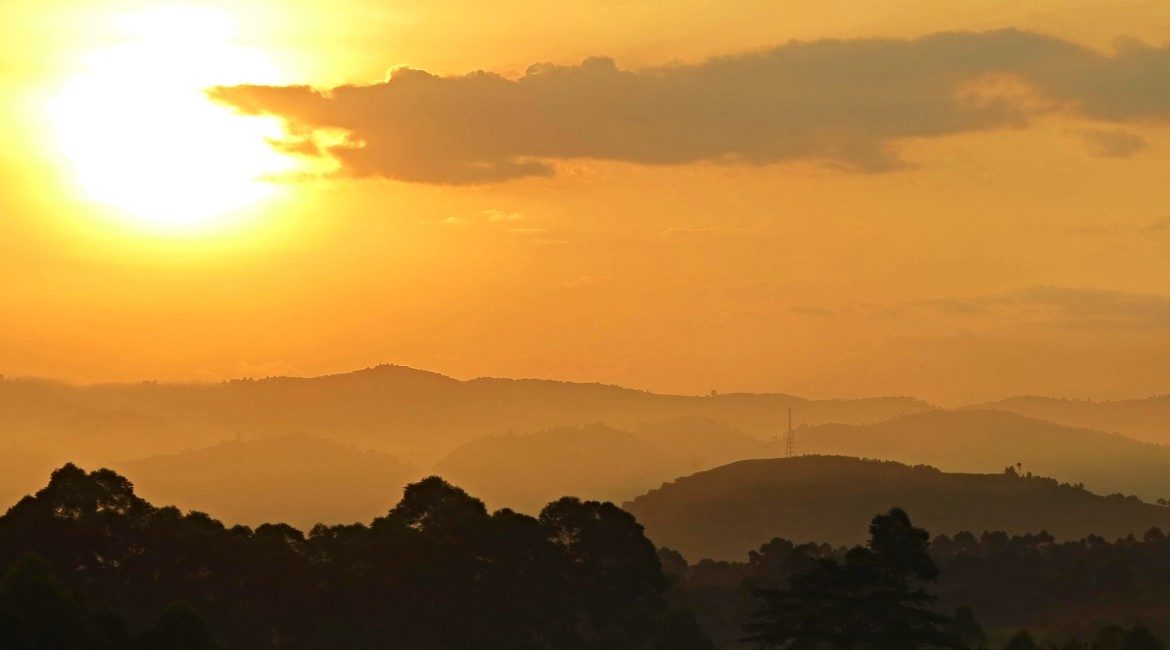 The sheer shock of war can make reconstruction a puzzle that needs to be solved. This is because the very institutions that were supposed to support reconstruction are often the first victims of war. Therefore, reconstruction often becomes a chicken-and-egg problem, in which destruction breeds uncertainty that, in turn, breeds further destruction. In order to determine the fix to such a problem, it is important to understand the nature of the damage that war causes.

Nature of damage in war

The economic and political consequences of armed conflicts and civil wars dive deeply into the socio-economic structure of a nation. These conflicts lead to loss of employment, income and livelihood; weakened infrastructure; collapse of national laws and state institutions; and broken social networks. The prolonged conflict in Afghanistan, for example, resulted in the country being ranked at the bottom of all human-development indicators. Furthermore, the country was marked as the seventh weakest state in the world as per the Fund for Peace global rankings.

In addition, these armed conflicts kill massive numbers of people and pose threats to the lives of all affected. For example, more than five million deaths were reported after a decade of violence in the Democratic Republic of Congo. Similarly, the genocide killings in Rwanda and Bosnia provide more evidence of the human toll of war and violence. Equally, the civil war of Côte d’Ivoire displaced 750,000 people internally and triggered refugee outflows of half a million people.

There is no fixed rule to explain a post-conflict economy. In some situations, conflicts reoccur after a short period of time once peace has been observed. In retrospect, violence continues even after the conflict has ended. Therefore, there is no one way to differentiate between the “before” and “after” of war conflicts. UNDP (United Nations Development Programme)describes post-conflict economies using the peace-building milestones. A post-conflict economy should find itself somewhere along the continuum on each of these milestones but might shift back a little.

Table 1.1 below explains these peace milestones along with possible indicators of progress: 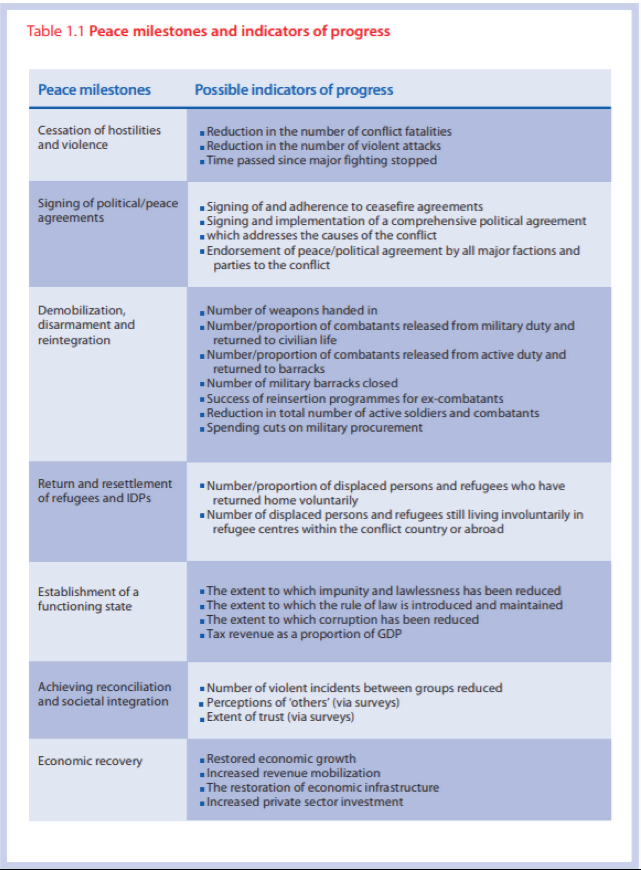 On this continuum, every nation aims to reach the stage of economic recovery.

With the end of the Cold War (between the former Soviet Union and the United States and its allies) in 1989, several civil wars and resentments also came to an end, while some new ones erupted. Many of these new wars were ended when international peacekeeping interventions were made. Today, around 35 countries may be termed as ones that have entered a post-conflict phase since the early 1990s. The majority of such countries are either low- or middle-income countries, which poses further challenges for the international community and the policymakers of the economic recovery.

Countries evolving from these conflicts face extreme constraints for mobilizing financial and human resources that are urgently required, initially for humanitarian relief and later for economic recovery. The post-conflict country has to maintain peace and sustain security, resettle IDPs (internally displaced persons) and returning refugees, develop public institutions and state infrastructure, and also gain the confidence of private investors. Reasserting control over national assets and reviving public finances should be the utmost priority. Lastly, countries should find ways to generate employment opportunities, minimizing horizontal inequalities and rent-seeking, and to restore the judicial system.

Conflict and violence divert resources from production to destruction. Post-conflict countries also face challenges of capital flight and massive damages to national assets and consequently decreases in economic production. In addition, damaged systems of asset acquisition and leftover resources result in highly negative environments for private-sector investments. Capital flight and lack of investor confidence are common in the post-conflict regime since markets have been severely affected at all levels, from village produce exchanges to national commodity and financial exchanges. With the devastation of legitimate economic activity, parallel and often illicit economies emerge that enrich warlords and sustain their constituents. Considering the challenges for the revival of legal economies in war-torn countries, these parallel economies constitute a further trap. Similar consequences were observed after the United States pulled out of Iran, which eventually led to the rise of ISIS (Islamic State of Iraq and the Levant)in Iran and the decrease of private-sector investment.

One of the least-spoken-about challenges and consequences of war is the psychological cost associated with military service. Several research studies have been carried out under the aforementioned subject, and results indicate that soldiers who serve in war-zone areas are more likely to be prone to PTSD (post-traumatic stress disorder) and to require emotional or psychological counseling than their fellow soldiers serving in different domains or non-combat zones. One research study indicated that “just the combat-induced PTSD imposes two-year costs of $1.5 to $2.7 billion on the US health care system”. It concluded that the psychological costs of combat are high for the soldiers who were injured during the war, killed someone or witnessed the death of a civilian or a fellow service member. Furthermore, these soldiers have a high risk of depression, suicide and long-term PTSD.

Seizures of property and funds have been another challenge for people living in post-conflict economies. A total of 93 cases have been reported in Syria and also numerous ones in Iran during which governments used anti-terrorism laws to seize properties and funds and take back control of the areas held by activists and rebel groups. The surprising fact here is that these people were not associated with any of the violence or terrorist groups. They were, in fact, labeled as such so that the government could seize their properties. HRW (Human Rights Watch) said that orders to freeze assets were among the numerous laws that the Syrian government used to punish political dissidents and opponents. From 2014 to 2018, around 327 individuals were the victims of property seizure by the Syrian government. Apart from properties, all of their other assets were frozen by the government. The government initially ordered freezes of the assets, which took away the rights of owners to either sell or commercially use them. Later, after the seizures were executed, the government sold their assets by auction. A similar practice was observed during the partition of India in 1947 when the properties of Muslims were seized by the state and then later auctioned at nominal prices.

Another consequence of seizure has been the massive displacement of labor. The individuals who moved away from their countries under such crises have generally not returned to their homelands (even after the wars were over), because being labeled as terrorists and having all of their assets acquired by the state left them with nothing to return to. Therefore, the loss of skilled workforce and human resources is another aftereffect of violent conflict. Likewise, around 1.5 million people were displaced from their homes to other places in Afghanistan due to war and terrorist activities.

Possible ways to recover from conflict

Post-conflict recovery can be explained from three angles:

Indigenous drivers basically focus on how the capacities and institutions that survived during the conflict can be utilized and reinforced. This approach strives to strengthen the efforts of existing enterprises, communities and households as they aim to rebuild their lives after the war. While building post-conflict recovery policies, the understanding of indigenous drivers should be the utmost priority. People residing in post-conflict settings certainly do not wait for external agents to finance their activities. In fact, they take part in rebuilding their economies with self-determination and hard work. Therefore, national actors take the lead in the process of economic recovery. Also, recovery should be used alongside the process of risk minimization. Basic service and training should not be limited to ex-combatants only. Host communities and unemployed civilians should also be included in this since enormous public-works interventions are required for employment creation. Furthermore, for the restoration of livelihoods, countries should start with what is left after the conflict, e.g., recovering partially damaged crops and providing necessary tools for the initiation of the next crop cycle. For example, Iraq used its oil reserves in order to recover post-conflict.

Microfinance and remittances also play a pivotal role in the recovery of the economy. Microfinance can fund self-employment and lift the burden off poor households, while remittances can support households in financing their education and health-related expenses. Perhaps most importantly, multi-donor trust funds (MDTFs), along with other pooled-funding mechanisms, can help rebuild local capacities.

Macroeconomic policies are the second-most important tool in the pursuit of recovery. In such times, macroeconomic-policy regimes should focus on jumpstarting the economy and boosting private investment, whereas other key points, such as raising domestic revenue and reducing inflation, should be lesser priorities. Investment can also bridge the gap between private and social returns. Considerable amounts of social return indicate that peace has been restored, which ultimately attracts more investors to the country; equally, they will also help reduce unemployment levels in the economy. While developing fiscal policy, financing recovery and employment creation should be considered.

Public expenditures can enable recovery if they effectively address horizontal inequalities, promote inclusive growth and generate employment. Building monetary and exchange-rate management regimes should also be a priority in post-conflict economies. Central-bank policies should be autonomous and immune to political pressures. Effective exchange-rate mechanisms also help in strengthening the trade policies of a country. Most importantly, aid can be an effective tool for growth and competitiveness; it can be used to relieve debts and build institutional capacities.

After the war, the role of the state is crucial in terms of recovery and peace consolidation. The absence of security will undermine rehabilitation and economic development. Therefore, providing security to all citizens and maintaining law and order is the primacy of the state. In the post-conflict era, the state should be authoritative, legitimate and effective. For this purpose, the state should provide justice, security and economic opportunities to all citizens without any discrimination. In order to ensure the sustainability of the state, core capacities and effective civil services need to be developed. As soon as tensions and hostilities end, the state should invest in training and retraining civil servants and the public sector’s management. For restoring fiscal policy, local revenue mobilization should be strengthened, and corruption and rent-seeking should be controlled, especially in areas where there are abundant natural resources.

Although there are a lot of similarities in the general trends and characteristics in post-conflict countries, there are differences in context globally—meaning that the scope, intensity and length of conflict in terms of peacebuilding and development varies across countries. Pre-conflict regimes and conditions are also different for each country. Therefore, one generalized rule cannot be applied to all post-conflict recoveries. Rehabilitation programs and policies must be designed and customized to each specific scenario.

Do Sanctions Work or Backfire? Russia and Iran...

10 Ways for Employees to Avoid Headaches at...

Should You Let Competitive Forces Dictate Your Operations?

How Much Debt is Too Much for UK...

Charting the Rise of the UK’s Bridging Market

Can Neuromarketing Help Your Organization?