Top Posts
International Women’s Day – An Industry Reflection
Consumer Privacy; Corporate Responsibility?
Why 2020 Could Be a Turning Point for...
Why are UK Landlords Leaving the Rental Market?
Hong Kong-China Unrest and the Implications for China’s...
Tactics for Keeping your Top Team Happy
Home Commentary Is the Eurozone on the Verge of Collapse?
Commentary

Is the Eurozone on the Verge of Collapse?

For Eurozone diehards, there is no political or economic storm that the European Union (EU) cannot overcome. In the past, the European Central Bank (ECB) has proven its power in ensuring that the forces that bind the EU remain intact. Since the 1992 Maastricht Treaty, the Eurozone has managed to stay stable amid a series of political and economic upheavals. Even when analysts agree about structural problems within the treaty, the EU leadership denies such issues and maintains that it is not to blame for the economic difficulties faced by some of its member states.

While the ECB has been doing its best to keep the Eurozone together, the wide range of economic and political pressures facing the region today poses a real threat to the survival of the union. With the slow growth rate, high unemployment, and the migration and refugees crisis, the EU seems to be headed for the worst recession in its history. As the public debt in most of the member countries continues to soar, the respective governments have been forced to implement austerity measures in a bid to cover budget deficits.

According to Mervyn King, the former governor of the Bank of England, the lack of political will by Germany to consolidate the enormous debt in the system has already sealed the fate of the Eurozone. King warns that the European Union is doomed, and further efforts by the ECB to make the member states stay will only lead to more problems. The rise of Euroscepticism among populist political parties has awakened a revolution that will see the majority of the member states reevaluating their positions in the bloc.

Everyone apart from the Eurozone bureaucrats can see the building storm.

With the exit of Britain from the European Union, the International Monetary Fund (IMF) warns of an uncertain future for the crisis-torn Eurozone. In a recent report, the IMF predicted a decline in growth for the region from the forecasted 1.6 percent this year to 1.4 percent next year. As the refugee crisis continues to worsen, analysts are warning of a further deterioration of the union as the adverse consequences of free movement continue to rise. The IMF warns that unless a solution to the collective problem is found, the bloc is headed toward its worst economic and political setbacks yet.

In May 2016, Moody’s, the ratings agency, downgraded the state of the EU, warning that even “a small crisis” would be enough to ignite an uncontrollable chain of events that would lead to its collapse. The survival of the single-currency zone is out of the question as analysts predict a huge domino effect following Brexit. Italy, the third-largest economy in the Eurozone, is currently in a severe debt crisis that is threatening to push it into a recession.

A recession in Italy would mean contagion across Europe and a meltdown that the EU would find hard to contain. Italian banks are already experiencing trouble with nonperforming loans, with the banking index declining further due to the shockwaves of Brexit. It is estimated that Italian banks have more than $400 billion in nonperforming loans on their books. 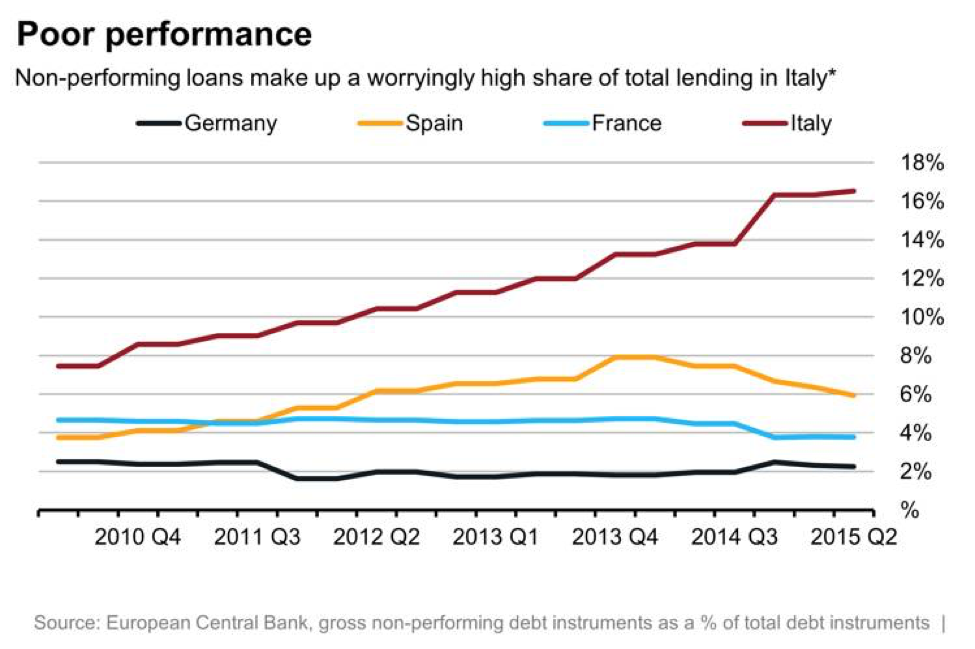 A Eurozone collapse may be the only way back to economic growth and full employment.

Even when it is evident that there will be a cost to the breakup of the European Union, the long-term benefits are greater. First, by choosing to stay, the economic powerhouses of Europe will continue to spend their taxpayers’ money on the uncompetitive, debt-ridden southern countries. Mervyn King believes that there is no way that indebted Southern Europe will emerge from the cycle of debt with the current austerity measures.

The former governor of the Bank of England calls for the IMF to initiate a debt-relief program, since there is no hope that the accumulated debts will ever be paid. If the debt-consolidation program is to be implemented, the immediate consequences will be harsh, but over the long run, a new equilibrium will be created, and there will be less debt in the system. On the other hand, if EU leaders continue to turn a blind eye to the current problems facing the region, it won’t be long before a full-blown economic and political crisis infiltrates the whole system.

The Eurozone will split if France leaves after their elections. At that point the UK will have a big advantage and we will be glad we left early, as the trend setter.